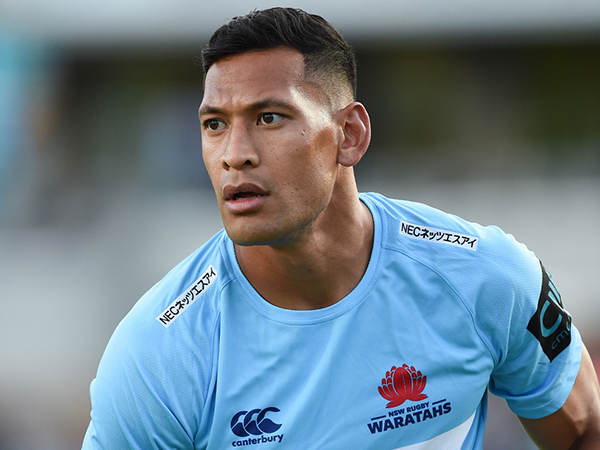 If you saw a man harming a young girl on the street, what would you do? Would you intervene? Call the police? Most agree there’s no justification for intentionally harming a child. If we know a behaviour is harmful to children, most adults stop the behaviour.

How is it possible, then, to justify the harm caused to children by Israel Folau's Instagram post?

The rugby union superstar (and idol to many) suggests gay people are destined for Hell, for the way they are born. The post, which implicitly suggests being gay is a choice, just like lying and cheating, has been liked by more than 52,000 people, including stars from other sports.

The harm of his post is explained by openly gay netballer Ashleigh Brazill (and teammate of Folau’s wife, Maria): "I think about how I would have felt as a 17-year-old if my idol had written that – it would have broken me.”

No doubt, Folau’s post has broken the spirits of many girls and boys who idolised him, while at the same time emboldened the homophobic bullies who target these young people.

In our research, teenage rugby players who described themselves as “highly” religious were significantly more likely to use homophobic slurs with teammates, and also agree with statements such as “gay men are disgusting”. 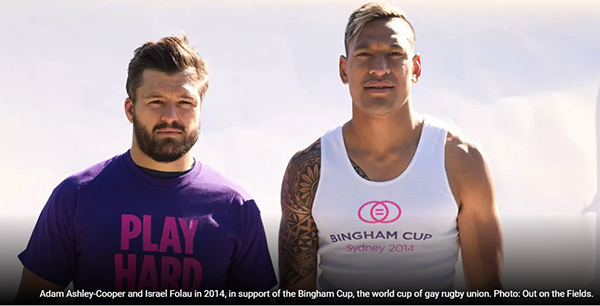 Sadly, I know first-hand that Folau is aware of the harm caused to young people from homophobic bullying and language use in sport, and every environment. I was the person who organised the now infamous photo of him (pictured above), and teammate Adam Ashley-Cooper, both wearing shirts supporting the Bingham Cup (the world cup of gay rugby) in 2014. This photo appeared on the front cover of Australia’s national gay newspaper, and, ironically, was also used in ads to recruit participants for a study examining homophobic behaviour in sport.

I chatted with Folau while the photographer set up, and he told me he has gay family members, and knew about the high rates of suicide among gay youth. He also told me he believed it’s wrong that gay people feel excluded from sport due to homophobic bullying.

He shared these same views, publicly, again last year in an article defending his first social media about gay people going to “HELL”: “It has been suggested that I am homophobic and bigoted and that I have a problem with gay people. This could not be further from the truth. I fronted the cover of the Star Observer magazine to show my support for the Bingham Cup [because] … I believe in inclusion. In my heart, I know I do not have any phobia towards anyone.”

There’s no clear explanation for why Folau, and many others, strongly defend their right to share some sections of the Bible, yet, as respected religious scholar and Monash emeritus professor Gary Bouma points out, they ignore other sections that endorse slavery and denigrate women.

It’s hard to understand why Folau says he cares about gay people, and knows their suffering, yet uses his powerful social media platform to compare gay people to thieves and adulterers.

By doing this, instead of helping to stop the bullying of gay kids, Folau is essentially passing a stone to bullies and online trolls to throw at these young people.

First published in The Monash Lens 3rd May 2019.