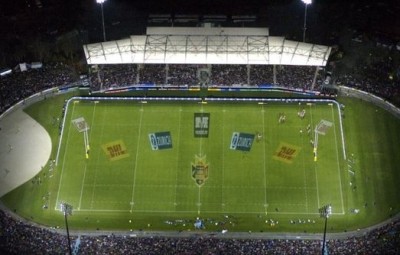 Rotorua locals are being praised for supporting the Warriors versus Penrith Panthers rugby league match last Saturday (14th February) in such big numbers, and are being urged to repeat their support for the Chiefs versus Bulls Super 15 rugby match in May.

Destination Rotorua’s Events & Venues General Manager, Peter McLeod, says the crowd of almost 10,000 fans at Rotorua International Stadium made it the biggest sporting event at the stadium since the Rugby World Cup in 2011, and well beyond any previous game in Rotorua involving the Warriors.

McLeod explained “we’re really grateful that locals got behind this match as it puts us in a very good position to attract more major sporting events to Rotorua in the future.

“Saturday’s crowd of around 10,000 was all the more impressive given that the match was also telecast live and it coincided with both the Rotorua Bike Festival and live coverage of the Black Caps playing Sri Lanka in the Cricket World Cup opener.

“This was the biggest crowd and the largest number of walk-up ticket purchases at the gate that we’ve experienced in many years. And it produced the biggest per centage of gate sales - compared to advance-purchased tickets - that we’ve ever seen.

“The game was an outstanding success as a sports spectacle and, in combination with the Bike Festival, meant the city was close to full over the weekend, giving our local economy a good boost.”

McLeod said Rotorua Lakes Council and Destination Rotorua looked forward to being able to bring more major sporting events to Rotorua and he hoped people would get right behind the big Chiefs versus Bulls Super 15 rugby match at Rotorua Stadium on 22nd May.

He concluded “We’d urge people to get in early and secure their tickets rather than wait until the day of the match and risk possible delays at the gate.”

Tickets for the Chiefs versus Bulls Super 15 rugby game are available from www.ticketdirect.co.nz