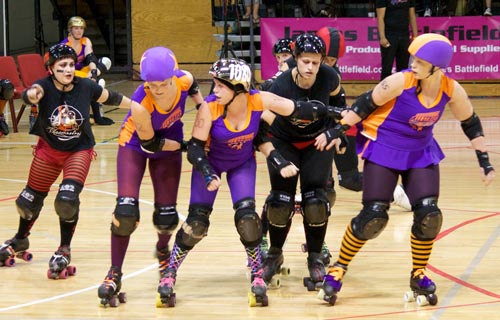 Recent roller derby events ('bouts' as they are called) at the Brisbane Convention and Exhibition Centre and Wollongong's WIN Entertainment Centre confirm the rise in popularity of the sport.

In June, what is understood to be the biggest flattrack roller derby competition ever held outside of the United States took place in Adelaide. The all women's Great Southern Slam attracted skaters from two thirds of Australia and New Zealandâs 30 or so roller derby leagues, the 500 participants competing in what organisers claim is the fastest growing womenâs sport in the country.

The sport, one of the earliest forms of what is now known as 'sports entertainment', started in the USA in the 1930s. The popularity of roller derby peaked during the 1960s and 70s, during which time the sport had a strong following in Australia, but then rapidly declined. In 2001, the sport made a comeback in Texas and was quickly embraced as a grassroots women's sport across the world.

Ideal for small to medium sized sporting arenas and indoor stadia, the sport is best played on a sprung wooden floor. However, finding venues to train and compete is one of the biggest challenges facing the sport. While ideally suited to roller skating rinks, small number of such facilities, particularly in metropolitan areas, has made Australiaâs roller derby leagues very adaptable, particularly as the managers of some basketball stadia prefer not to have roller skates on their courts.

As 'Aprilla the Hun' of the Sydney Roller Derby League (SRDL) explains "when we started in 2007 we trained at the University of Sydney's HK Ward Gymnasium which could just about fit us and 50 spectators. After that we used the double basketball court at the Sydney Boys High School before moving to the Hordern Pavilion in May this year."

Since moving to the Hordern Pavilion, SRDL has staged four sell-out bouts, each with crowds of 2,500.

Similarly, the surging popularity of roller derby in Brisbane has seen the Northern Brisbane Rollers move up from local sports halls to become a regular presence at the Brisbane Convention and Exhibition Centre.

A combined bout linking the SRDL with leagues in Canberra, Newcastle, the Illawarra and Western Sydney was staged at Wollongong's WIN Entertainment Centre on 19th September.

The reemergence of roller derby is explored in a feature, 'Fishnets, Mouthguards and Athleticism' in the September/October 2010 issue of Australasian Leisure Management.

If you don't already receive the magazine, be sure you get your copy by subscribing here. Back issues are also available.