Research highlights the benefits of resistance training for seniors’ fitness 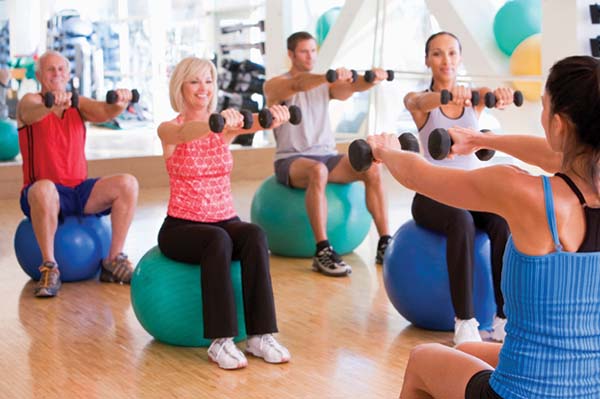 According to a new Deakin University study, community exercise programs could be key to helping Australia’s ageing population maintain bone and muscle health, while busting common misconceptions about the type of exercise best for older adults.

Professor Robin Daly, Chair in Exercise and Ageing at Deakin’s Institute for Physical Activity and Nutrition (IPAN), said retirees needed to look beyond gentle exercises like walking and water aerobics if they wanted to get serious about their musculoskeletal health.

Professor Daly explained “weight-bearing exercise is crucial to maintain our bone health. Unlike our cardiovascular system, bones like to be regularly stressed and will adapt positively to the loads and demands placed on them.

“Unfortunately that message just doesn’t seem to be getting through, and right now around 75% to 95% of Australians over 50 are not meeting recommended physical activity targets to maintain good bone and muscle health.

“So while we know that exercise can improve musculoskeletal health and function, many people and even medical professionals don’t often know what particular type of exercise works best for older adults to see these improvements.”

Professor Daly has developed an evidence-backed program he’s dubbed ‘Osteo-cise: Strong Bones for Life’, which has been trialled in a number of community leisure centres in Melbourne’s western suburbs.

The trial evaluation was published in a recent edition of the Journal of Bone and Mineral Research, and shows that it delivered multiple improvements to muscle and bone health not only in its implementation phase – when researchers were closely overseeing the program – but also after the community leisure centres took over its management.

Professor Daly added “that’s critical, because it’s one thing to see results in a controlled setting where you have all these extra resources and experts working directly with a population group. But we wanted to establish if we could implement a community program that continued to see benefits after we left.

“We showed that what we developed in theory does work in practice in the real world to get older Australians active in improving their musculoskeletal health.”

About 160 people took part in the trial, with half in the exercise program and half making up a control group. The program was targeted at people aged over 60 living in the community who were at risk of falls and fracture due to low bone density or osteopenia.

Gym instructors at participating leisure centres were specifically upskilled to deliver tailored exercise programs targeting the muscles around the hip and spine, including progressive resistance and weight-bearing impact, and how to deliver challenging balance and mobility training to optimise muscle function.

Professor Daly also noted "in the 12 months with researcher supervision the attendance rate was about two out of three sessions per week, and we saw positive effects of exercise on the lumbar spine and femoral neck bone mineral density, improved muscle strength, and physical function.

“Given that time is a major factor stopping people from exercising, this is a really positive finding. Our study shows if you take a correct approach to exercise, multiple bone, muscle and function improvements can be sustained in older adults with low bone density with just one or two training sessions per week.”

Professor Daly is now hoping to secure further funding to translate the ‘Osteo-cise’ program into a national exercise initiative for older adults, adding "what we want to do next is train up more health professionals to deliver this kind of program to older Australians, and provide professional development for clinicians on best practice exercise programs for older people.

“Currently a lot of what is being delivered isn’t evidence-based. So now we’ve shown what works we want to scale that up, and get more older Australians building healthy bones and strong muscles for life.”

• Walking, cycling and swimming alone are not effective for preventing bone loss or falls.

• Rapid, short bursts of weight-bearing exercise are more effective than one long session.

• For the greatest benefits and to also improve muscle mass and strength, include progressive strength (resistance) training - lifting weights that become more challenging over time - at least twice a week and ensure that the exercises target the major muscle groups around the hip and spine.

Image courtesy of My Fit Station.