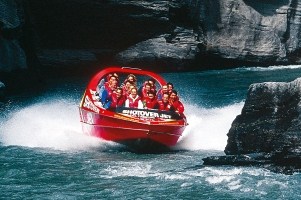 Dart River Jet has undergone significant change in the last three years after developing experiences specifically for the Chinese market, according to Chief Executive Quinton Hall.

Hall explains “product development alongside strong local and international sales and marketing has seen Dart River become a ‘must do’ for Chinese tourists.”

Hall adds “Chinese travellers look for high-quality experiences, and the Royal endorsement from the visit of the Duke and Duchess of Cambridge last year has been a strong story to tell in the Chinese market. We’ve seen significant growth in visitation at Shotover Jet also in the last two years.”

Earlier this year Tracy Cui from Ngāi Tahu Tourism’s Southern sales team was recognized as the outstanding young business person of the year at the Queenstown Chamber of Commerce biennial business awards.

Known locally by her Māori nickname ‘Taniwha iti’ (Little Dragon), Cui has been working with Ngāi Tahu in Queenstown for the past four years. The award noted her dedication to developing experiences to appeal to the Chinese market and work in selling Ngāi Tahu Tourism South Island activities and Queenstown generally in China.

Hall concluded “making the most of the emergence of China onto the world tourism stage has been a strategy of Ngāi Tahu Tourism for at least four years.

“Considerable work has been done and will continue to be undertaken to ensure that we make the most of this opportunity.

“The HSBC award is deserved recognition of a great team effort.”

Ngāi Tahu Tourism is one of New Zealand’s premier tourism operators and the parent company of an extensive portfolio of iconic tourism and adventure experiences.

From high adrenalin thrills to remote and spectacular World Heritage locations, each business offers a range of unique experiences for travelers to and around New Zealand.

Ngāi Tahu Tourism is a subsidiary of the Ngāi Tahu Holdings Corporation.

For more information go to www.shotoverjet.com