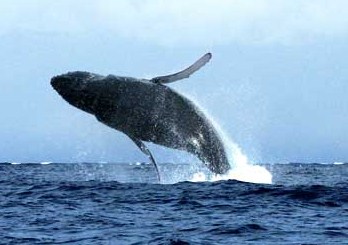 A Queensland whale watching industry pioneer has hit out against a new recommendation tabled at the review of the Australian National Guidelines for Whale and Dolphin Watching, saying the suggestion is ludicrous and would significantly harm the industry.

Held at the University of Queensland Business School in Brisbane in late May, the aim of the workshop was to discuss the outcomes of a scientific literature review and included invited participants from NGOs and key whale watching operators from every Australian state and territory.

It also stated that the dual zone system of separate regulations for whales and dolphins is effectively impossible to enforce as operators cannot see calves until much closer than 150 metres, by which time the effects of the boat approach are unavoidable.

Owner of Whales in Paradise and Dolphins in Paradise, Anthony Ardern, who is a vocal industry leader, conservationist and Federal Government marine environment consultant, said the key recommendation was preposterous and would significantly impact the industry.

Ardem stated “a 100 metre zone for dolphins is just ludicrous – it’s like folding an A4 piece of paper in half, painting it black and trying to see it at the opposite end of a football field – and it’s quite amazing that some operators actually believe it is a good idea.

“Most marine watching operators do both whale and dolphin sighting expeditions and if the recommendation is approved and regulations are amended, it will essentially shut down the dolphin arm of our business.

“These are completely safe distances and allows the industry to survive – there won’t be a whale and dolphin watching industry in Australian waters if these recommended changes to the guidelines are implemented.” 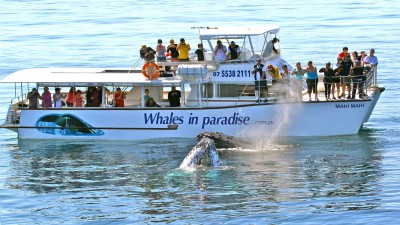 Australia has a multitude of sites around the coastline that are ideal for whale and dolphin watching and marine mammal watching is a rapidly growing industry in Australia.

In 2008 whale and dolphin watching tourism was worth $31 million to the Australian economy and the number of tourists participating has grown to over 1.6 million people per year.

Author of the Review of Scientific Literature Describing The Impacts Of Whale And Dolphin Watching, Professor Robert Harcourt of Macquarie University, submitted the review of scientific literature, focusing on a range of whales and dolphins species.

Professor Harcourt’s review said the recommendation had been made on the grounds of a consistent lack of compliance within the industry.

Professor Harcourt’s review  stated “one study found operators continued to breach the National Guidelines by not discriminating between dolphin schools with or without calves and another paper found that 90% of encounters when pods had calves present were as close as 50 mm or less.

“(The) 100 metre standard for all groups will reduce close encounters in presence of calves and also provides a regulation that is readily understood by operators as well as enforceable.”.

Ardern has participated in tours and research trips throughout the world including Canada, Hawaii and New Zealand, exploring the latest research technologies and refining international best practice methods for the business and custodianship of the whales and marine environment.

Existing guidelines are extensive and to be considered best practice, operators are encouraged to provide an educational component to their tours that educates customers about existing guidelines at state and national levels to protect whales and dolphins.

The dual tier categories consist of Tier 1, national standards applied to all people watching whales and dolphins, and Tier 2 providing for additional management considerations that apply primarily to the commercial whale and dolphin watching industry.

He added “the recreational user is actually the biggest problem as they are often uneducated and unaware of how to approach marine mammals properly.

“Some operators are saying the amendment simplifies the parameters and makes it easier to prosecute the recreational user but this is just not the case.

”It should be left at the status quo because there are already options under Tier 2 that enable heavier regulation in problem areas which can be relaxed or tightened when required.”

However, Ardern conceds that not all of the proceedings were negative and positive dialogue had also transpired.

He added “there was comprehensive discussion about each part of the guidelines and it was a pretty good conversation in general.”

The ongoing process of guideline revisions is yet to go back for consultation with the Federal Environment Minister and broader industry groups.

The Australian National Guidelines for Whale and Dolphin Watching 2005 were developed jointly by all Australian, state and territory governments through the Natural Resource Management Ministerial Council, and represent a consistent national policy for the management of whale and dolphin watching.

Whale and dolphin watching in Australia operates within the Australian Whale Sanctuary.

Click here to view the Australian National Guidelines for Whale and Dolphin Watching.