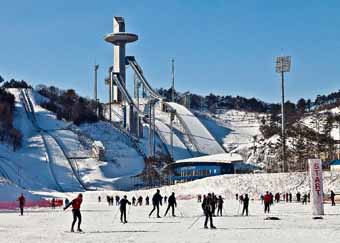 Organisers of the PyeongChang Winter Olympics have dispelled concerns about their readiness to stage international competitions next year in preparation for the 2018 Games, saying venue construction remains on schedule.

The first test event for the South Korean host will be the International Ski Federation (FIS) Alpine Skiing World Cup in Jeongseon, near PyeongChang, from 3rd to 7th February next year, followed by the FIS Snowboard World Cups in Bokwang, another satellite town of PyeongChang - first in slopestyle from 19th to 21st February, and then in snowboard cross from 25th to 27th February. Bokwang will also host the FIS World Cup in Freestyle Skiing from 18th to 20th February.

Yeo explained “from February 2016 to April 2017, we will host 28 international events in Olympic and Paralympic sports, including five world championships.

“They will take on great significance as we will look to hone our organising and operational skills before the Olympics.”

Yeo said he will “humbly accept” recent criticism from local media that PyeongChang needs to improve its preparations but stressed that proper steps have been taken on all fronts.

He added “I understand people’s concerns about our work, and we will try extra hard to ensure successful test events.

“We’re trying to hammer out final details with our local partners in Bokwang on the use of the venue.”

Yeo also debunked a common misconception that a venue has to be 100% complete for a test event, continuing “with our alpine venue in Jeongseon, we can host the World Cup races when it’s 60% complete, with all essential facilities in place.

“We’re at just over 53% completion rate now, and it’s expected to be finished by October next year. We will work through the Christmas and New Year’s Day holidays to get all the necessary work done in time.”

According to Chung Yong-wook, Director of the test events department at the organizing committee, 50 billion won (US$42.4 million) has been allocated for the 28 test events.

For the FIS Alpine Skiing World Cup next February, about 2,300 athletes, coaches, journalists and spectators are expected to be on hand.