All around the country, women in their thousands – and sometime men and children – are attending pole dancing studios looking for an alternative to more conventional fitness club offerings. While thriving in studios, established fitness clubs are also taking note.

The Hard Candy gym in Sydney (pictured below), backed by Madonna, has included a pole dancing studio since opening in 2012, while Pure Fitness clubs in Singapore do the same.

Participants require strength, flexibility and balance to climb, spin, slide and invert on the stationary pole, and it is this challenge that keeps people coming back. A typical pole class consists of both cardio and anaerobic aspects with a lot of core strength and technique needed to perform on the pole.

While providers and participants stress pole dancing the exercise and artistic attributes of pole dancing, there can be no avoiding its adult industry associations in many studios, with their mirrors, night club style lighting and red down-lighting.

However, advocates stress its artistic heritage in circus and acrobatics while the International Olympic Committee recognise pole dancing as a non-Olympic sport.

According to the International Pole Fitness Association, pole's roots can be traced to 12th century China, where it was used by male circus performers. Some 800 years ago in India, a wooden pole was used in gymnastics training by male wrestlers.

As the IPFA describes it, modern pole dancing reflects a "fusion of the finely-tuned circus performer skills of the Chinese, the energetic acrobatic skills of the Indians and the alluring and sensuous dance skills of the Western world".

Yet, Kennetta Hutchens, founder of Pole Divas – one of a burgeoning number of schools around Australia – says sexiness is a crucial part of pole fitness.

“I think there's a fascination with it, and it makes women feel good about themselves." 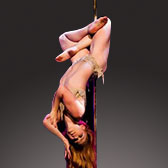 Hutchens believes pole dancing encourages self-empowerment, backed up by a recent survey of her clients.

She explains "we asked our students to tell us about a physical skill or mindset transformation that's happened since they started with us.

“90% came back with mind transformations. We were stunned.

“We thought it would be all about the physical, but there were massive stories about changes to their lives and confidence."

Founder Lisa Singh explains "the kids' classes are taken from an acrobatic perspective (with) backbends and an emphasis on flexibility, as well as using the pole.”

Over nearly two years, Sydney-based Miss Fit Dance Studio has been running a ground-breaking Australian program that combines pole dancing with a controlled eating plan – which has achieved great results in helping women lose weight, increase muscle tone and build their self confidence.

The BodyFit weight loss program is run by the Studio and the Bites Health Clinic, and marks the first time that a clinical trial had been performed to measure weight loss using pole dancing and a controlled eating plan.

On average, each participant lost over five kilograms during the trial, with one participant losing up to 14kgs and achieving a 47% reduction in her total body fat.

Miss Fit Dance Studio Manager Sarah Thompson explains "as far as we are aware, there is no other fitness program like ours that incorporates both pole dancing and a healthy eating plan, under the guidance of a qualified dietitian, to help women achieve weight loss and fitness results.”