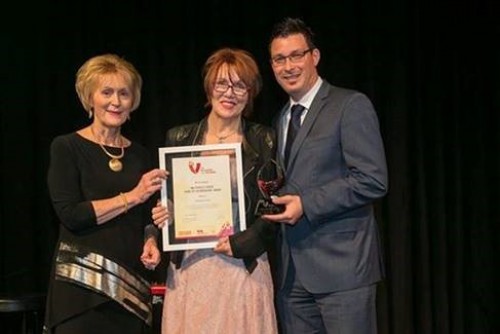 Michelle Dunlop, co-owner of the Plus Fitness Woodvale franchise in northern Perth, has been honoured at the Western Australian Volunteer of the Year Awards.

Named the ‘People’s Choice Volunteer of the Year’ at the Awards, the honour is recognition of her role as a strong advocate, driver and contributor for local community based volunteer work.

Co-founder of 'The Grief Centre of WA', a not for profit organisation providing free support and understanding to the bereaved, Dunlop is also the founder of 'Street Friends WA' charity, which, over 10 years, has been helping the homeless community of WA.

The charity takes to the streets to care for between 150 - 200 people of all ages, both male and female and every Thursday night - supported by around 30 volunteers which now even includes their own ‘street doctor’ and hairdresser.

Commenting on receiving the Award, Dunlop stated “it has been a great pleasure to serve those doing it tough on the streets, and at least for one night of the week they are fed, clothed and have warm provisions and kindness extended"

"I have seen firsthand from my own life experience of losing my mother to cancer when I was six years old, and also my vocational experience, that lives can be broken through unresolved and unsupported grief. We have seen the impact of this work enable many people to feel supported in their sadness, as they navigate a very difficult journey".

Dunlop became a Plus Fitness franchisee back in December 2012 when she opened Plus Fitness Woodvale with her son Jon.

Since the beginning, the club has become well known in the area as being an incredibly inviting gym with a fantastic atmosphere.

A Plus Fitness spokesperson advised “it is no secret that one of the most important aspects in the success of a franchise business is the commitment, passion and hard work that is invested by the franchisees and their staff.

“We are extremely proud of our hardworking, dedicated and passionate franchisees and we love hearing about, and sharing stories of their achievements both within our network as well as the great work they do in their everyday lives.”

In addition to Dunlop’s volunteering award, she is also being honoured as a member of the ‘Queens Baton Relay’ which will take the baton to the opening ceremony of the Commonwealth Games on the Gold Coast in 2018.

Image: Michelle Dunlop (centre) receives her honour at the Western Australian Volunteer of the Year Awards.

17th August 2012 - SUPPORT FOR CHILDRENS’ SPORT AND VOLUNTEERS IN WA