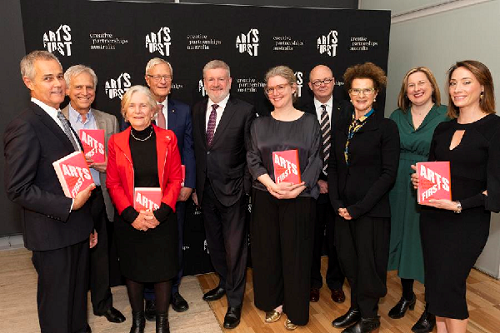 Six exemplary individuals from Australia’s philanthropic, business and arts sectors have been celebrated at the 2018 Creative Partnerships Awards in Sydney.

The awards are a celebration and recognition of the leaders who have made outstanding contributions to Australia’s cultural life. These champions have used their vision to foster enduring partnerships between cultural and private sectors to support the arts.

The Creative Partnerships Awards are happy to announce the following winners:

Arts Leadership - Richard Gill AO, whose humble beginnings as a music teacher led him to become a world-renowned composer. His advocacy for music education has seen him working closely with students from Darwin, Armidale, New Zealand and as far as rural China.

Business Leadership - Adrian Fini OAM has been at the forefront of delivering affordable housing and exciting urban spaces to Western Australians for over thirty years. Adrian has recently donated $150,000 to the Perth International Arts Festival to fund new arts programs.

Emerging Philanthropist (joint winner) - Mark Rubbo OAM and his independent retail chain, Readings, have contributed enormously to Victorian literacy programs. The Readings Foundation has donated more than $700,000 to community and school programs in as little as five years.

Emerging Philanthropist (joint winner) - Beau Neilsonhas followed in the footsteps of her mother, Judith Neilson, and forged her own path in arts patronage with donations to the Australian Chamber Orchestra, the Sydney Dance Company, and as a trustee of the Neilson Foundation.

Philanthropy Leadership - Tim Fairfax AC and Gina Fairfax have a significant and enduring legacy of philanthropy for the arts. Their Tim Fairfax Family Foundation has donated hundreds of millions of dollars to galleries and foundations over the last fifty years, and their contributions have recently extended to A World View: The Tim Fairfax Gift - a long-running exhibition that aims to bring works by leading international artists to Queensland.

The general public were invited to nominate individuals by answering a few simple questions to determine whether they fit this year’s criteria. Nominees were chosen from across the country for their leadership, advocacy and continuing commitment to supporting the arts.

The winners were determined by the Creative Partnerships Australia Board.

This represents the largest percentage increase since 2011.

This is the third year the awards scheme by Creative Partnerships Australia has run. The awards embrace the legacy of the Australian Business Arts Foundation Awards, which celebrated excellence in partnerships and private sector support to the arts for more than a decade.

Creative Partnerships Chief Executive Fiona Menzies commented “Australia’s arts landscape is truly one of the best in the world. But a vibrant, sustainable and diverse arts culture like ours calls for enduring support from all levels of government, business and individuals who share a vision and passion for the arts.

“Each of the winners for this year’s awards have been selected not only for their contribution to arts partnerships, but also because of their passion for the arts and their desire to encourage others to share in that passion. I congratulate them on their commitment and leadership in supporting the arts.”

Image: Winners of the 2018 Creative Partnerships Awards with Federal Minister for the Arts, Mitch Fifield.

10th October 2017 - New alliance to champion wellbeing in the arts