Creative Partnership Awards to celebrate leaders who support for the arts 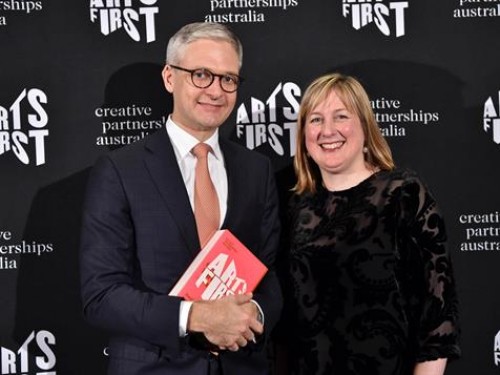 Creative Partnerships Australia have announced details of their 2018 Awards, designed to celebrate leaders who encourage private sector support for the arts.

She explains “these people are highly engaged in the art forms they support. I think it is only of benefit to the arts community if they have people who want to engage with them at that really deep level.”

Creative Partnerships Australia is inviting people who work in the arts industry to nominate leaders from Australia’s philanthropic, business or cultural community. For those who know someone who meets the criteria, now is the time to recognise the contribution they make.

The awards send an important message about the value of giving in the arts, which in Menzies’ experience has a positive domino effect.

“We call them ‘leadership’ awards because we are really looking for people who have not only been generous donors and engaged donors, but ones who encourage other people to be donors, who show leadership by introducing other people to the art form. Participating in those activities to really spread the word. We want to find those people who have shown that kind of leadership.”

As for how effective this growth is also depends on the involvement of organisations, not just donors, with Menzies adding “we want to encourage organisations to celebrate the people who have had that kind of deep engagement with arts organisations.”

In 2017, the Emerging Philanthropy Leadership Award went to Joseph O’Brien, whose enthusiasm for the arts led him to join the Queensland Art Gallery/Gallery of Modern Art (QAGOMA) Foundation. A few years later he also joined the Future Collective, a group of Brisbane professionals who raised funds for the acquisition of contemporary work for the QAGOMA collection.

Menzies said the Creative Partnerships Awards is all about this kind of proactive support of the arts through giving.

She concluded “there are so many people out there who are really generous, and I’m not just talking about the people who have a lot of wealth and are able to share that wealth, but also people who have modest incomes but still want to share part of it. We celebrate all of those people.

“That’s the other thing about the awards. By focusing on leadership, it really isn’t about rewarding the biggest donor, it’s about rewarding people who encourage others and share their love of the arts.”

Arts Leadership Award for an individual working in the arts and cultural sector who through leadership, advocacy, practice and example has made an exceptional contribution to Australia’s cultural life; demonstrating vision, commercial acumen and strategic thinking in their engagement with donors and business, and encouraging increased giving to the arts.

Business Leadership Award for an individual working in the business sector who through their leadership, advocacy, practice and example has made an exceptional contribution to Australia’s cultural life by fostering increased investment and engagement between business and the arts.

Emerging Philanthropy Leadership Award for an individual who is new to the philanthropic sector (within the last five years) and whose leadership and contribution to the arts is shaping the future of philanthropy and private giving in Australia’s cultural sector.

Philanthropy Leadership Award or an individual, family, group, foundation or other entity that through their leadership, advocacy, practice and example has contributed significantly to the arts and encouraged philanthropic giving to the arts.

For more information go to creativepartnershipsaustralia.org.au

10th October 2017 - NEW ALLIANCE TO CHAMPION WELLBEING IN THE ARTS