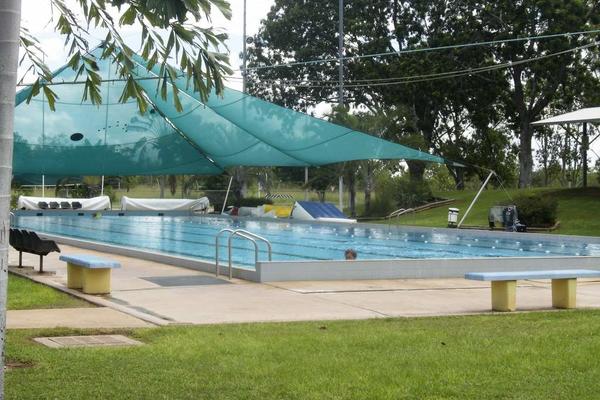 National guidelines state that the safe level of PFAS chemicals for recreational water use is 0.7 micrograms per litre, but the pool recorded readings of 0.84 in late September, 15 times greater than the maximum recommended safe drinking level.

In a statement the Council advised that that it chose to take immediate action given the local community's concerns around PFAS contamination.

Katherine Town Council Chief Execuitve Robert Jennings advised “while trend analysis is usually required, Katherine Town Council recognises the community sensitivities around the issue of PFAS and has taken the proactive step to temporarily close the swimming pool to immediately address this situation.

"The most recent test taken on 28 September 2017 at the Katherine YMCA Pool has returned a result of 0.84 micrograms/litre of per- and poly-fluoroalkyl substances (PFAS) which is above the national recreational water quality guideline of 0.7 micrograms per litre."

Katherine Town Council said the interim plan is to reopen the pool once the water is safe to swim in.

Its statement advised "council will rely on the Australian Department of Defence to assist in identifying an appropriate management plan to address the issue and ensure that the pool water quality is within national guidelines.”

The contamination in Katherine, 270 kilometres southeast of Darwin, was caused by chemicals used in firefighting foam at the nearby Tindal Airbase in the late 1990s and early 2000s.

Since then, the chemicals have leached into the water supply, causing elevated levels of potentially toxic PFAS chemicals.

Since August, Katherine households have been subject to compulsory water-saving measures, including only watering their lawns three days a week.

In August 2017, Northern Territory Minister for Health, Natasha Files maintained that the water in Katherine was safe to drink.

Katherine Mayor Faye Miller said she was surprised by the unexplained increased levels, and expected that the pool would remain closed while the council investigated, telling the ABC “at this stage I would say that it will be up to two weeks by the time we change the water, and of course to have that testing again, which would take another seven days.”

Mayor Miller said the pool was being supplied by private bore water but is now being supplied by town water, but that hadn't been enough to reduce PFAS levels, so half the pool's water would be removed and replaced with water from the town's water supply.

She explained "that is not an overnight job, because as you can appreciate it's a massive pool.”

As a result of a meeting between the Council and the Department of Defence today, events such ase upcoming swimming carnival, will be relocated to the pool at the Tindal RAAF base outside of Katherine.

Mayor Miller cautioned residents against excessive panic, advising “you can certainly be alarmed, but just make sure you keep a lid on it because we can become extremely anxious but it's not going to resolve anything.

"This has been going on for a very, very long time."

Mayor Miller said the Northern Territory Department of Health's guidelines state that absorption of the chemicals through the skin is minimal, and that people would have to swallow "an awful lot" of water before it would have an effect.

As the dry season comes to a close, temperatures in Katherine have been reaching 40 degrees Celsius, which makes the local pool a central part of many residents' lives.

One local told the ABC "I think it's pretty alarming, our kids have been swimming in it during the holidays now that it's heating up.”

Another advised "now we've got nowhere to swim, a lot of people go down to the low level (at the river) but there's been crocs sighted down there.”