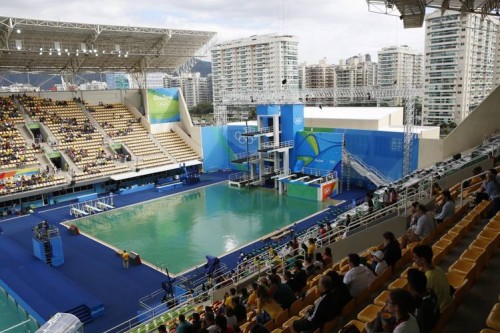 Rio Olympics organisers have admitted the wrong chemicals were put in the pool at the Maria Lenk Aquatics Centre on the day of the opening ceremony, turning it a emerald green colour that has attracted global attention.

After several days of complaints and conflicting advice, Olympic organisers advised that a contractor added 80 litres of hydrogen peroxide to each of the diving and water polo pools on Friday 5th August.

However, organisers said they only found out on Tuesday (9th August) when the water in the diving pool turned green.

The addition of hydrogen peroxide neutralised the chlorine and, according to some reports, allowed algae to bloom.

Rio 2016's Director of Venue Management Gustavo Nascimento told media “this is a way of cleaning swimming pools but you're not supposed to combine it with chlorine.

"We were not consulted, our contractor's failure is our failure."

Nascimento advised that the electronic monitoring system for the pools at the Maria Lenk Aquatics Centre was functioning but was fooled by the chemical reaction to think that the chlorine was still working.

He added that the 120 athletes using the diving pool had also increased the amount of "organics" in the water.

Rio 2016 spokesman Mario Andrada commented "of course, it is an embarrassment.

"We are hosting the Olympic Games and hosting the world's best athletes. The water is not supposed to be an issue. This was an issue we could not solve quickly (but) we need to have water looking the way it should look." 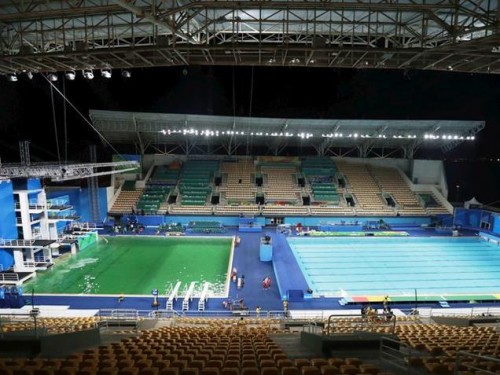 Pressed on whether algae had formed in the pool, creating the green hue in one pool and then the other, Nascimento added "we do not know the reason why it went green. According to the chemical analysis we did three times, we could not tell if organic material was already there or what is causing that. There has been no health problem at all.

“We've been guided by health experts from FINA and Rio 2016 all the way through. Health is never an issue in this incident."

For the synchronised swimming to take place as of Sunday night in Rio, Games organisers are transferring almost four million litres of water from one of the warm-up pools into the pool previously used for water polo group games.

Games organisers are not replacing the water in the diving pool but are attempting to stabilise the water chemistry and trying to make the algae more dense to clean it up.

Andrada declined to answer questions on who would pay for the treatment.

Built for the 2007 Pan American Games, the Maria Lenk Aquatic Centre was refurbished by the Games organising committee for Rio 2016.

Commenting to partners and representatives of Neptune Benson, Michael Turner, Vice President International Business Development - Neptune Benson wrote “the bottom line is that these pools (at the Maria Lenk Aquatic Centre) were the existing pools - using sand filters - from the Pan-American games several years ago.

“At this point this is a great testament to the filtration of using Defenders.”

Myrtha Pools also issued a statement clarifying that their technology was not used at the Maria Lenk Aquatic Centre. Click here to read the statement.

Images: Pools at the Maria Lenk Aquatic Centre during the past week.