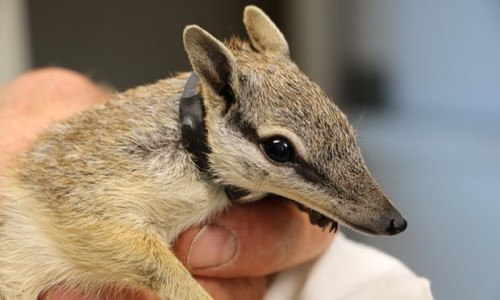 14 numbats will be released into a predator-free wildlife sanctuary 350 kilometres north of Perth in an ongoing attempt to save the critically endangered species.

It is the first release of captive-bred numbats into the 7,800 hectare Mt Gibson sanctuary, which has been declared free of feral cats and foxes following an extensive baiting program.

Staff at Perth Zoo have attached radio collars to 19 juvenile numbats ahead of the planned release next week.

The remaining five will be released to Dryandra woodland, an area 170 kilometres south of Perth that houses the largest wild population of numbats in Australia.

It brings the number of numbats released to 220 since the captive breeding program began in 1992.

Senior Zookeeper in the native animal section, Dani Jose, said the teenaged numbats had to move out to make room for the next batch, which will be born in January.

They have been fattened on termites and extensively weighed and examined ahead of the release.

Apart from having their collars fitted and spending some time upside-down being measured by a caliper, the numbats have been largely left alone to allow their wild instincts to develop.

Jose explained that it makes the process of preparing them for release relatively easy, stating “if we were to handle them too much they would become very focused on us and perhaps not as afraid of predators."

Feral predators are the greatest risk to the survival of the small marsupial, which was found across southern Australia before European colonisation.

It has since retracted to just 1% of its original range and is only found in Western Australia, where it is the state’s fauna emblem.

A program to eradicate foxes, dubbed Western Shield, saw a slight recovery in numbers in the 1990s, but that number shrunk again when the feral cat population expanded.

The Western Australian Environment Minister Albert Jacob said a new feral cat bait was having some impact on cat numbers.

Minister Jacob stated "I would say the future looks brighter than it ever has in the last 40 years for the numbats.

“Not only have we advanced significantly in our knowledge of how to breed them and how to feed them in captivity, we have also increased our sanctuary areas.”

Another 1,000 hectare predator-free sanctuary is planned for Dryandra woodland, and the area has also been slated for inclusion in a new 16,000 hectare national park.

Minister Jacob added "the ultimate goal would be to delist them as an endangered species.

“We know these species can recover if we can give them breathing space from those feral predators and if we can have a strong breeding program so that we have that genetic diversity and a strong population bank.”