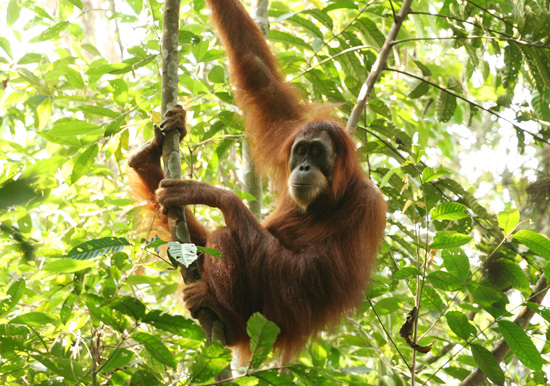 Keepers at Perth Zoo are trying to work out how to make their orangutan enclosure more secure after a weekend escape by one of the primates.

Five-year-old Teliti delighted visitors and shocked keepers when she managed to escape her enclosure and take a wander in the Zoo's grounds.

The escape, the second by an orangutan from an Australian Zoo in the last month after a similar incident at Melbourne Zoo, has gained international media attention

Perth Zoo spokesperson Danielle Henry told Fairfax Media "orangutans know to climb and swing but until now it was generally thought that they couldn't jump.

"So that came as a real surprise to us."

The Zoo's respected primate team has started trying to work out how to redesign Teliti's enclosure.

Henry added "we've worked very closely with a Perth architects company in the past and it's likely we'll be calling them in to help with this issue too."

Teliti is believed to have used a solid shade sail to jump from the enclosure she shares with her mother Puteri. She walked around the enclosure for a few minutes before going back inside.

Zoo primate supervisor Holly Thomson said Teliti was very gregarious and curious, adding "like a lot of adventurous five-year-olds she has taken the opportunity to test her boundaries but soon realised it was preferable to be with her orangutan colony."

Image of Teliti (in her enclosure) courtesy of Perth Zoo.