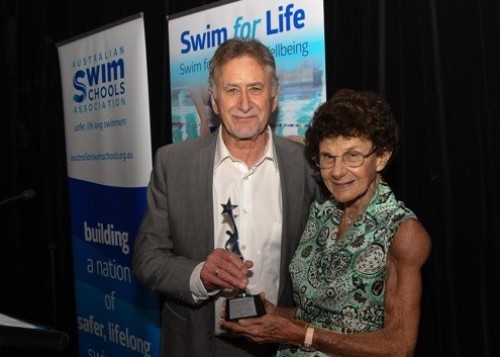 Paul Sadler, founder and leader of the Paul Sadler Swimland group, has been inducted as Legend 03 in the Australian Swim Schools Hall of Fame.

Announced before a crowd of 149 swim school professionals at the Australian Swim Schools Association conference in Darwin this week, Sadler was presented with a ‘Forbes’ award by co-Legend 01, Ursula Carlile.

Sadler, whose Swimland swim schools are benchmarks across many areas of the industry, has been involved in the teaching of swimming and water safety for over 50 years.

Others inducted into the Australian Swim Schools Hall of Fame were:

Earlier in proceedings, the Australian Swim Schools National Awards of Excellence were presented. The recipients were:

Commenting on the Awards, ASSA Chief Executive Ross Gage stated “the outstanding calibre of the Awards Dinner and the esteem of the recipients well and truly reflects the remarkable growth and high standards of the Association, established in little over a year”.

The ceremonies were held during the annual Awards Dinner, at the Australian Swim Schools Conference in Darwin.