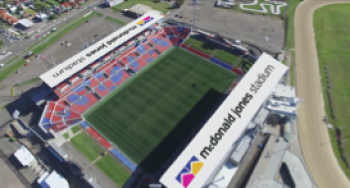 The NSW Government has revealed a long term vision for a major overhaul of Newcastle’s Hunter Sports and Entertainment Precinct with a masterplan to open up the site for private development and redevelop the city’s outdated entertainment centre.

While it includes no funding commitments, the draft concept plan, developed by Venues NSW, for the 63-hectare site in the Newcastle suburb of Broadmeadow includes plans to relocate the Newcastle harness racing track - tipped to make way for a $20 million rugby league centre of excellence - as well as opening the door for the construction of a new hotel, a new indoor arena to replace the ageing Newcastle Entertainment Centre (NEC), ‘consolidated sports facility’ that could include a new aquatic centre, outdoor tennis courts and parkland.

Opening a three-month community consultation period on the plan, NSW Minister for Sport Stuart Ayres explained “the long term masterplan for the Hunter Sports and Entertainment precinct aims to see it buzzing with world-class sporting events, concerts and entertainment for decades to come, as well as providing a solid home for grassroots sport and recreation.

“This precinct is close to the hearts of Hunter residents. It is part of the region’s proud sporting history and is a place where fans gather to cheer on their favourite team, play weekend sport or relax and enjoy a great concert. Our focus is to ensure that everyone continues to have a positive experience.”

The new concept plan lays out a number of potential development options which Minister Ayres said were “the start of the conversation” about the precinct’s future, commenting “we’ve got a canvas that has part of the painting on it but it’s by no means finished.

Part of that painting is a clear invitation for private developers to be involved in the redevelopment of the site, which is made up of NSW Government-owned land. 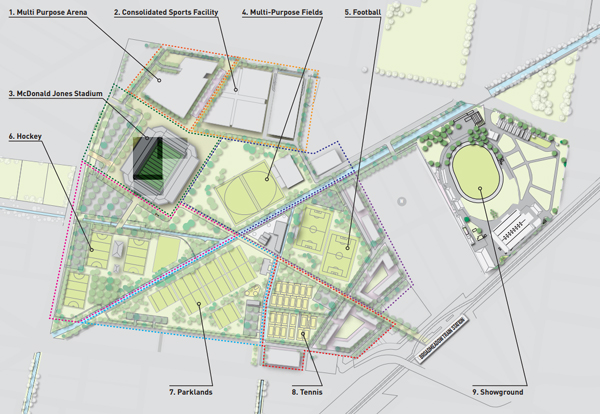 The 15-page plan includes a section on ‘commercial opportunities’, and suggests the possibility of a ‘small commercial development’, ‘medium-rise residential’ development on land at the edge of the precinct and ‘a tourist and business hotel’.

Minister Ayres also suggested that any redevelopment of the NEC  could be led by the private sector, and said developers needed “clear rules of play” about where they could invest.

None of the possible developments in the concept plan are costed, because, Minister Ayres said, it would “preempt” the views of the community, continuing “we don’t want to preempt or force one hand on top of the other, we don’t want to say that this has to be public and this has to be private, so it’s very important we have a transparent conversation now and work through a fairly diligent budget process.”

The concept plan states that the Showgrounds are underutilised, and says the Show could be incorporated into the redeveloped precinct “just as Sydney Olympic Park was designed to be transformed into the destination of the Royal Easter Show every year”.

The community is now invited to give their feedback on the plan by email and at a series of community forums.

Click here to view the Vision for the Hunter Sports & Entertainment Precinct document.

Images: The McDonald Jones (Hunter) Stadium (top) and the proposed masterplan for the site (below).