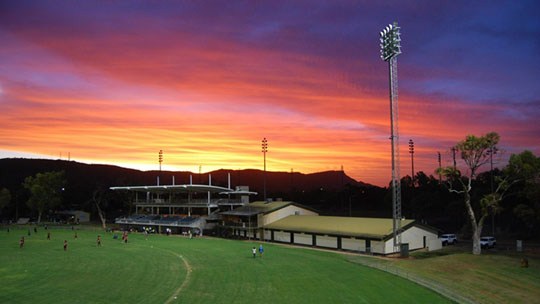 Alice Springs' Traeger Park played host to a third round NAB Cup match on Saturday night, marking a big weekend of sport in the Red Centre.

The new Minister highlighted the popularity of major sporting fixtures in the town, stating "we had more than 8,000 attend last month's Indigenous All Stars and Richmond game at Traeger Park, which shows how much Centralians love their footy."

She added "the Northern Territory Government remains committed to bringing big game sporting events, like the NAB Cup, to the Territory and will contribute $7 million over five years to the AFL to ensure this happens.

"Having games like the NAB Cup in the Territory allows our up and coming stars, as well as those just starting out in the sport, to aspire to achieve their own dreams of playing AFL."

Tregear Park is Alice Springs' primary stadium with a capacity of 10,000.

Unlike other recent high-profile sporting events in the town, the Northern Territory Licensing Commission did not enforce a ban on alcohol for the fixture.

Darwin will also host AFL action in 2013 with premiership games to be held at TIO Stadium on 1st June between the Western Bulldogs and Port Adelaide and on 20th July when Melbourne play Brisbane.