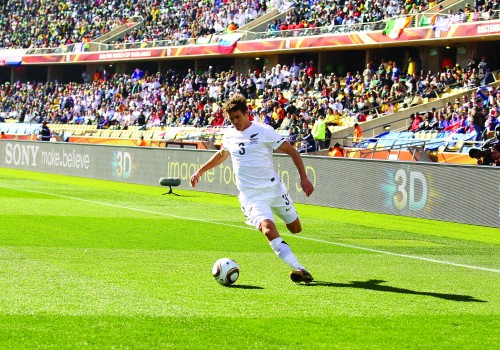 New Zealand Football's award-winning development blueprint, the 'Whole of Football' plan, is poised to expand after a successful pilot year.

Launched last year among 95 pilot clubs from around New Zealand after extensive research in leading football nations, the Whole of Football plan aligns development programmes with the aim to provide a unified pathway into the game and deliver a consistent high-quality experience to players, coaches, and officials.

The formulation of the wide-ranging plan was recognised by Sport NZ's innovation award in 2010 and introduced in the 2011 season at the junior level as a pilot scheme with investment from Sport NZ as well as corporate partners ASB and Persil.

This season the junior end of the plan rolls out to the majority of clubs and New Zealand Football Chief Executive Grant McKavanagh says the aim is very much to solidify the gains made during a busy and challenging first year.

McKavanagh explains "this is a game-changer for New Zealand's biggest grassroots sport and it's too important not to succeed.

"We've taken stock after year one and the feedback from development staff, from clubs and from participants will influence how we deliver in 2012.

"The numbers are quite staggering for a pilot year when you bring them together, and it wouldn't have been possible without the incredible support from Sport New Zealand, and the amazing dedication to improve football from the development staff at NZF and the federations."

Close to 70,000 people received specific football development programmes in 2011 as a result of the Whole of Football Plan and that number is only going to get bigger with the junior programmes looking to be expanded to all clubs in 2012 followed by similar pilot-first rollouts at youth and senior levels over the coming years.

McKavanagh added "almost 10,000 kids were involved in the new junior framework, our ASB Football in Schools programme reached over 31,000 students, and there were almost 4000 new coaches equipped with age-appropriate coaching courses.

"In addition, over 1700 youth elite players took part in Federation Talent Centres while in the fast growing area of women's football a massive 5000 girls took part in football over Girls and Women's Week alone."

Increased support from Sport New Zealand in 2012 will fund more regional development staff and further their reach into areas of coaching, women's development and futsal.

Fundamentally the Whole of Football plan aims to increase quality of the football experience at every level, from coaches to players, social to elite, young to old and Central Football Federation's Football Development Manager Brett Angel says the momentum at ground level is building.

Angel explains "there was naturally some scepticism at first when the new formats were introduced but parents have seen their kids more involved in every game have more touches and time with a ball and this has led to an improvement in skills and enjoyment.

"We've seen more kids playing, and the feedback we've had is that parents feel much more supported with the amount of trained volunteers, game leaders, and quality material behind it all."

Whole of Football Plan Year One:

For more information go to www.nzfootball.co.nz

Image: Tony Lochhead in action for the All Whites.