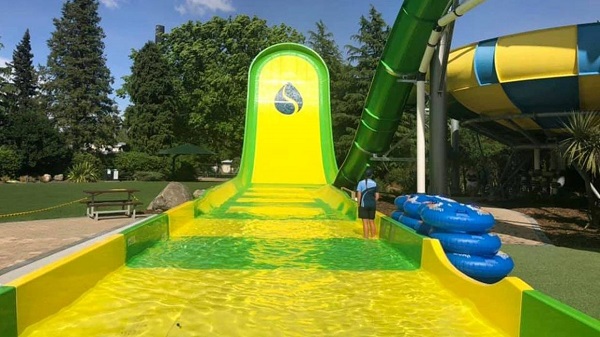 Hanmer Springs Thermal Pools and Spa complex is owned by the Hurunui District Council with Mayor Black stating that the new developments will help attract more visitors to the region and boost the economy.

Mayor Black commented "economic development is a key focus of the Hurunui District Council, and this project reflects our current and continued vision to support the tourism industry.''

The new ride’s name Conical Thrill is a play on the name of one of the village's most well-known natural attractions, Conical Hill.

The naming followed a public competition that saw more than 2000 people help name the new 13.5-metre ride, with other options including the Hanmer Halfpipe and Cloud Rider.

A class of very excited students from North Canterbury's Leithfield School were the first official riders having won a video competition.

The Cascades are five pools connected by a series of waterfalls. The pools were designed to be water efficient with no holding tanks, and were built on timber frames, above ground, to protect the giant Redwood tree roots below.

Half of the energy required to run the new pools and slide comes from a heat transfer unit using energy that is a bi-product of the electricity generator.

Previously wasted methane gas from an old gas bore and a thermal deep water bore, discovered during a redevelopment of the complex in 2006, is converted into electricity for the generator. 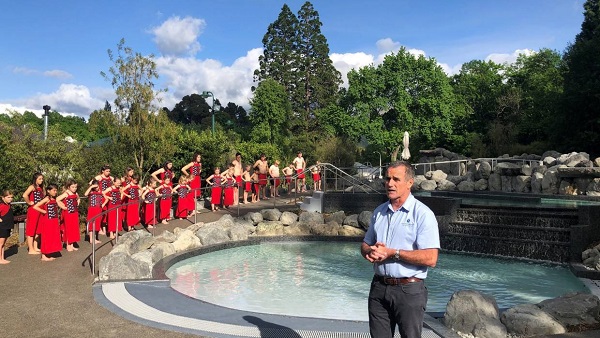 Commenting at the opening, Hanmer Springs Thermal Pools and Spa General Manager Graeme Abbot advised "this is the end of more than three years of planning and construction. We're very proud of Conical Thrill and The Cascades and know they'll become popular features.''

Abbot added that the new additions will be a drawcard for the complex, boosting visitor numbers to the alpine spa village commenting that "the new Cascade pools and Conical Thrill slide add enormously to our offering. We now have 22 pools and four hydroslides, making the complex a really desirable option for anyone - both here and abroad.

"It's amazing to think that all this has grown from a single thermal pool and a tin changing shed."