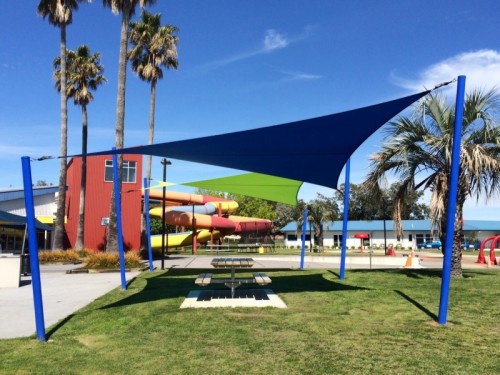 Councils across New Zealand may start to take a closer look at how shade can be introduced into public spaces, as research increasingly proves it to be the leading form of prevention of skin cancer.

Palmerston North City Council is one Council that has been focusing more on the provision of shade in public spaces over the past two to three years.

Its Sun Protection Policy, adopted in 2010, outlined how it will help to reduce the rate of skin cancer in Palmerston North by improving shade and other sun protection measures throughout the city. In 2013, the Council installed shade sails at the Lido Aquatic Centre.

Palmerston North City Council Parks and Property Manager John Brenkley says that the Council allocates $26,000 every two years for artificial shade funding in public spaces, and a further $25,000 each year for natural shade via tree planting.

Brenkley explains “our preference is to plant trees, but sometimes that’s not appropriate.

“Sometimes we rely on both, in playgrounds for example where the play equipment might have artificial shading, but there might also be trees.”

Brenkley advises that the Council aims for a holistic approach when it comes to funding public space projects, and that shading is typically considered alongside other aspects such as water conservation, signage and public amenities.

He adds “we try to be aware of all these things at the design stage.”

Architect Christina Mackay, also a senior lecturer at Victoria University, has been researching the design of shade for UV protection for the past decade.

She says New Zealanders are beginning to understand the importance of shade in UV protection, but more needs to happen to raise awareness of how to design the most effective shading for different situations, advising “international experts now agree that the use of shade rather than sunscreen is the number one strategy against UV over-exposure.

“In New Zealand, there is a cultural shift happening, in areas like housing for example where people are now making big shaded outdoor areas rather than exposed deck areas. It would be excellent to make this cultural change in our public spaces as well."

Recreational space, Mackay says, is the prime setting for developing shade-related initiatives – which is why Councils and the New Zealand Recreation Association have key roles to play in awareness-raising and implementation.

Mackay concludes “the fact is that, when shade is provided in public spaces, people do take advantage of it, especially if it is light and warm.”

Skin cancer rates in New Zealand are the highest in the world. The high levels of ultraviolet radiation present throughout much of the year, and especially during the summer months, are related to the prevalence of skin cancer.