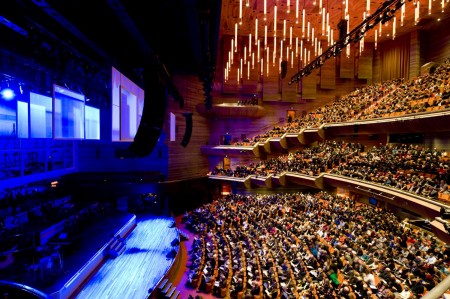 In this time, its stage has been shared by international stars such as k. d. lang and Kristin Chenoweth, and Australian luminaries like Barry Humphries and Meow Meow, Melbourne Symphony Orchestra and some great community celebrations.

Commenting on the venue's performance, Victorian Minister for the Arts Heidi Victoria stated "Hamer Hall has been returned to Victorians as a 21st century civic centre for culture, community and entertainment.

"The outcomes of the redevelopment have been applauded by musicians and audiences alike, and put Hamer Hall on the map as an outstanding performing arts centre of international renown."

Arts Centre Melbourne Executive Performing Arts Tim Brinkman added "we have been thrilled at Hamer Hall's new capabilities and the vast range of entertainment that it is now able to present to audiences. It has been wonderful to see such a huge variety of people heading in the doors to enjoy such a wide variety of artists."

After a two-year closure and $135.8 million redevelopment, the new Hamer Hall reopened on 26th July 2012 with a significant refurbishment of the building's design, acoustics and technological equipment. The building's façade was altered to open up to Southbank's lively riverfront and internally the auditorium was reshaped to improve acoustics. State-of-the-art technologies, including an acoustic reflector and new audio visual equipment, were also installed to bring Hamer Hall up to international standards.

Hamer Hall's new multi-purpose functionality has been utilised by innovative events like the MSO's Lord of the Rings and Pirates of the Caribbean screenings, and theatrical productions including the hip-hop dance spectacular Blaze the Show, the classical music/dance show Red Bull Flying Bach, and the ever-popular Shane Warne: The Musical.

The extraordinary music event, Raising the Roof, was the community event of the year, connecting a range of Victorian community music groups with Arts Centre Melbourne on an unprecedented scale as part of the Hamer Hall Opening Celebrations. The culmination of six months of outreach workshops, it featured almost 500 performers, including 250 singers from regional choirs across Victoria and a participating audience of 5,960 people.