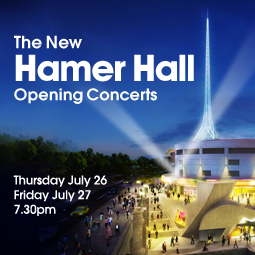 After a two year hiatus Hamer Hall, Melbourne's premier concert venue, has just reopened and is ready to claim its position as one of world's great concert venues.

Closed for a major facelift and upgrade, Hamer Hall's improvements are part of the Victorian Government's redevelopment of the city's Southbank cultural arts precinct.

The $135.8 million transformation of Hamer Hall has made it far more accessible to visitors, providing a better experience for audiences and enhancing the attraction of the concert hall to leading international and national performers.

The Hall has set a new benchmark with its improved auditorium acoustics, additional seating, staging systems and technology, which will position it to be one of the world's most sought after concert venues. Hamer Hall has also expanded its outward facing entrances on St Kilda Road and Southbank promenade. True to Melbourne's obsession with culinary experiences, it houses additional new restaurants, bars and cafés including signature restaurant Trocadero by celebrated restauranteur Frank Van Haandel and one of Australia's leading Japanese restaurants, Saké Restaurant & Bar.

Hamer Hall is one of Art Centre Melbourne's venues located within the Southbank Cultural Precinct, which is home to the city's significant arts venues and organisations, including the National Gallery of Victoria, the new Melbourne Recital Centre, the Melbourne Theatre Company theatre, the Australian Ballet, the Victorian College of the Arts and the Australian Ballet School.

Arts Centre Melbourne Chief Executive Judith Isherwood told The Age that said the redevelopment had been hard work, but the results exceeded her expectations.

"It's an historical moment for Hamer Hall to be back and looking so beautiful and fit for the 21st century. It's now a world-class concert hall, with world-class acoustics."

Hamer Hall's redevelopment is the first stage of the Southbank Cultural Precinct redevelopment masterplan, which is aiming to extend and reinforce connections to the Yarra River, the city centre, Federation Square, Birrarung Marr and nearby sports venues of Melbourne Park and the Melbourne Cricket Ground.

For further information go to www.artscentremelbourne.com.au