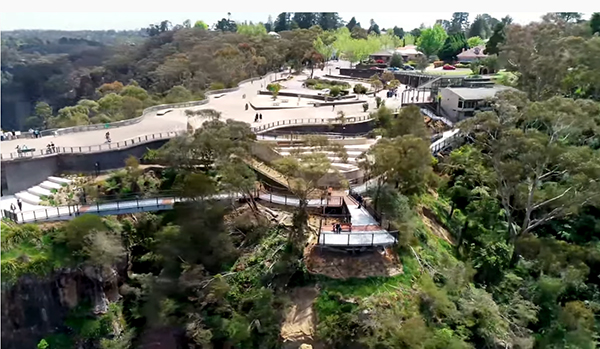 The upgraded area of Echo Point at Katoomba was officially opened today (14th November 2020) delivering a new Gathering Place with the spectacular Blue Mountains backdrop of The Three Sisters and the Jamison Valley.

About 30 people attended the COVIDSafe event, held during NAIDOC Week, which was also live streamed via social media.

The new features at Echo Point include:

The broader project funded by Council and the Federal Government also included restoration of the heritage-listed Katoomba Falls Kiosk, replacement of three cabins at Katoomba Tourist Park, formalising the Silvermist Reserve car park and the upgrade of walking tracks and lookouts at Katoomba Falls.

One of most impressive features of the Gathering Place at Echo Point is its stylised “Map of Country” which is etched into the concrete floor of the stage area. This represents the significant waterways within Dharug and Gundungurra Ngurra (Country), in the Blue Mountains.

Mayor Greenhill advised “the Traditional Owners first introduced the idea of a meeting place, or Gathering Place, in 2016 – a place where they could share the significance of this sacred part of Country to visitors.

“That idea – and partnership with Council – has led to this spectacular new development that will be appreciated by the millions of visitors who visit this site.”

Gundungurra Elder Aunty Sharyn Halls notes “(This project) has been a journey of four years.  We’ve turned this concrete area into something special – a place where Aboriginals can tell their stories.”

Dharug man Chris Tobin added “our local Council respects our Aboriginal culture. We have a glorious opportunity now to now share this culture with the world. Our ancestors were a model of sustainability and we’ve got to share that.”

Deputy Prime Minister Michael McCormack said the Australian Government’s $3,592,143 investment in community infrastructure would provide long term benefits to the Blue Mountains noting “with an estimated 140,000 annual visitors projected to use this new facility, this investment will deliver a long-term forecasted boost of $10 million in benefits to the local economy over the next 20 years.

“By supporting 25 jobs in construction and creating many ongoing positions after completion, in addition to using local businesses and supplies, this project will help bring economic prosperity to the Blue Mountains for many years to come.”

Senator Marise Payne said the Gathering Place reflected the powerful and enduring connections traditional owners have to Country and added “the new facilities mean locals and visitors alike will be able to better appreciate and understand the cultural significance of Echo Point.

“With the festive season fast approaching, this major project will bolster the Blue Mountains economy, supporting jobs and driving tourism.” 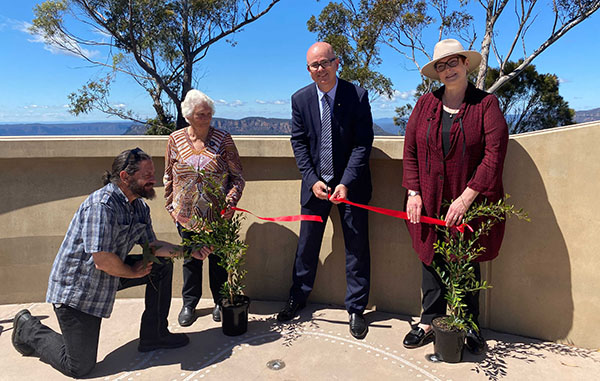 At the launch, invited guests were welcomed on the site with a traditional smoking ceremony which was conducted by Gundungurra man David King and Chris Tobin. The ceremony holds cultural significance as it blesses the site and all of the invited guests as they walk through the smoke. The meeting place will be known as Dyindinggang (Gundungurra) and Dyinbarri (Dharug).

Mayor Greenhill, on behalf of Blue Mountains City Council, thanked the Dharug and Gundungurra Peoples for their “incredible contribution to this project and for sharing their cultural and spiritual knowledge of this place with the broader community.

“I see this magnificent site as a shining example of what can be achieved when Traditional Owners, local Councils and the Federal Government work together for the betterment of the entire community.”