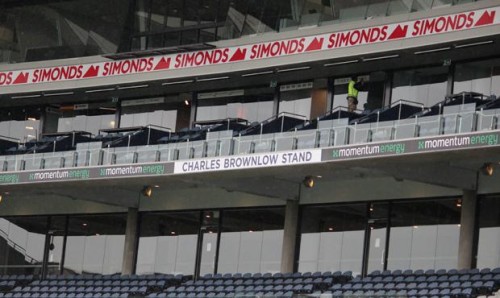 The Geelong Cats have officially unveiled the completed stage 4 redevelopment of the Simonds Stadium the Charles Brownlow Stand, just a day before the club’s Friday night AFL Premiership clash.

Commenting on the latest stage in the redevelopment of the famous venue Cook stated “We started with this vision in 2001, a masterplan … and over the four stages we’ve spent $200 million in total amongst all of the stakeholders.

“It’s taken 16 to 17 years and it’s been a real task ... but when your dreams come true, or a vision becomes a reality, it is very comforting in the soul.”

The Charles Brownlow Stand includes 6,500 seats and increases the total capacity of Simonds Stadium to 36,000, providing the ability to host a diversity of events of national and international significance.

The state-of-the-art redevelopment includes, improved media facilities, a new 1000-seat function centre, merchandise store, café, an enhanced football department and the Sunrise Centre, a community facility that will aim to rehabilitate people to return to the workforce following serious injury.

The Charles Brownlow name holds a special part in the club’s heritage, Brownlow’s contribution to the club, the city and the game being described as “outstanding.”