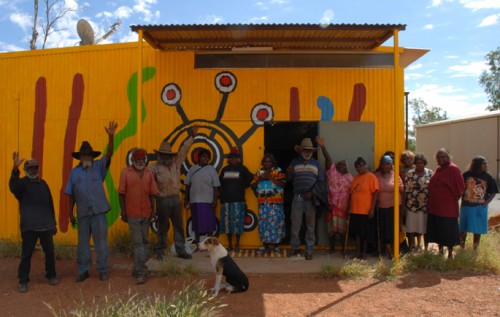 An exhibition of unique works from a new Aboriginal art movement emerging from the Western Desert opened at the National Museum of Australia in Canberra today (Friday 7th December) and will be on display until November, 2013.

Warakurna: All the Stories Got into our Minds and Eyes, a collection of paintings, woven fibre and carved wood sculptures were produced at Warakurna, a community at the foot of the Rawlinson Ranges in Western Australia, 300 kilometres west of Uluru (Ayers Rock). The works are the product of

Warakurna Artists, a thriving art centre in the heart of the Ngaanyatjarra Lands.

Produced in the last two years, the paintings in the Warakurna exhibition are more figurative in style than traditional Western Desert art. The artists from Warakurna use their painting to document their history the coming of explorers, prospectors and missionaries, building roads, missile testing and their return to their homeland.

National Museum of Australia Director Andrew Sayers explained "at the National Museum we are interested not only in history, but also in the way in which historical events have changed the lives of Australians. The painters of Warakurna have produced a unique and original body of artworks. They are extremely valuable as intriguing and first-hand accounts of significant events in the life of an Aboriginal community."

Western Desert people were among the last groups of Aboriginal people in Australia to have contact with Europeans while Warakurna lay in the middle of the flight path of missiles launched from Woomera in the South Australian desert in the 1960s.

The majority of the paintings in the exhibition were donated to the National Museum by Wayne and Vicki McGeoch under the Commonwealth Government's Cultural Gifts Program in 2011. The National Museum purchased a further 10 paintings in 2012. All of the paintings have been included in the Museum's permanent National Historical Collection where they sit alongside early Papunya boards and important works from the Canning Stock Route collection.

For more information go to www.nma.gov.au/exhibitions/warakurna/home