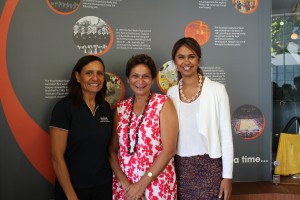 Netball Australia has begun the development of its first Reconciliation Action Plan (RAP) with guidance from prominent Aboriginal and Torres Strait Islander sporting and community identities.

The announcement coincided with the start of National Reconciliation Week, which runs from 27th May to 3rd June.

Finnan represented Australia in 20 Tests and was part of the 1991 and 1999 world championship winning teams while Ella-Duncan played 18 Tests and was also the first Aboriginal scholarship holder at the Australian Institute of Sport in Canberra.

Finnan said she was “very honoured” to be a member of the RAP Working Group, stating “as one of only two Indigenous players to have represented Australia at international level, I would like to see greater representation of Aboriginal and Torres Strait Islander players, coaches and umpires at the state and national level.

“I believe that the RAP will assist in guiding the relevant organisations in achieving these outcomes.”

Netball Australia Chief Executive Kate Palmer said the development of a RAP aligns with the national sporting body’s strategic vision to ensure that everyone in Australia values their connection with netball.

Palmer explained “netball aims to cater for Australia’s diverse and changing population, and to ensure that all Australians have an opportunity to be involved in netball in a way that brings them good health, recognition, achievement, enjoyment and sense of belonging.

“Initiatives of the Reconciliation Action Plan will apply a course of action to specifically address the identified needs of the Aboriginal and Torres Strait Islander community in order to increase participation and involvement in netball, from the grassroots to the elite levels.”