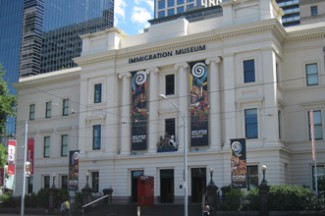 The Immigration Museum has launched its Multilingual Museum Tour app made in partnership with the Special Broadcasting Service (SBS).

Introducing the tour app, a statement on the Museum Victoria explained “we also had had the Consulate Generals of Spain, Italy, and France and our project partners SBS.

"The Minister spoke of the importance in recognising Melbourne as a successful, contemporary multilingual society and the significance of the Immigration Museum as a place to celebrate Victoria's multiculturalism."

The tour features detailed text, audio commentary and historical imagery that reveal the stories of the people, businesses and architecture that have transformed Melbourne and Victoria.

The Multilingual Museum Tour builds on the technology initiatives and programs that Museum Victoria has been developing in recent years which assist in increasing audience access to its museums and collections.

23rd October 2014 - FOOTBALL HAS A KEY ROLE IN MIGRANT ADJUSTMENT