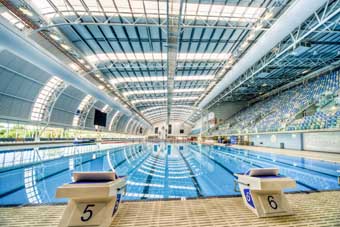 The 2012 EnergyAustralia Swimming Championships will see a record number of 834 athletes compete for Olympic and Paralympic nomination.

The eight day event, being held from 15th to 22nd March at the South Australia State Aquatic & Leisure Centre in Adelaide, to be broadcast live on Ten and ONE will incorporate selection trials for the 2012 London Olympic and Paralympic Games with athletes racing to finish first or second in an Olympic event to earn nomination.

Swimming Australia Head Coach Leigh Nugent said the increase in athletes participating is a huge boost for the sport and a strong vote of confidence for the new SA Aquatic & Leisure Centre.

Nugent explained "we had 699 athletes compete at the 2008 Trials and to see another 100 or so enter for this year's EnergyAustralia Swimming Championships is fantastic for the development and growth of the sport.

"Our trials always produce tough competition and great depth across many events, and that is certainly the cast this year.

"A quick look at the first night of competition and the rankings, suggests some tough racing especially in the women's 400 metre IM with Stephanie Rice, Blair Evans, Samantha Hamill and Ellen Fullerton leading the way."

The eight days of competition will also see the return of Olympic champions Ian Thorpe, Michael Klim and Libby Trickett.

Thorpe will contest the 200 metre freestyle starting on Day 2 - Friday 16th March of competition, while Trickett will be in action on the opening nightin the women's 100 metre butterfly.

Five-time Commonwealth Games gold medallist Alicia Coutts will also be in action on the opening night in the 100 metre fly, as well as contesting the 200 metre IM and 100 metre freestyle later in the meet.

World Champion James Magnussen will start his quest for Olympic gold with the heats of the 100 metre freestyle on Sunday 18th March while Geoff Huegill will have to wait until Wednesday 21st March, to see if he can secure a spot at a third Olympic Games.

Tickets for all sessions are still available through Ticketek at http://premier.ticketek.com.au/shows/show.aspx?sh=SWIMMING12