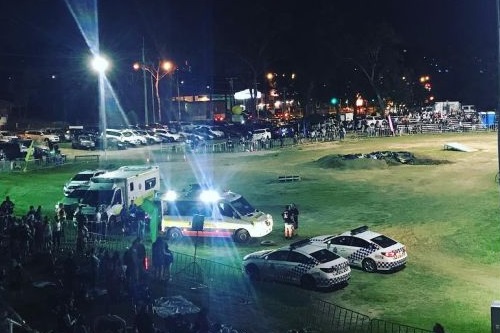 Organisers of a monster truck show in Brisbane have come under fire after a child was hospitalised with minor leg injuries when a stunt car accidentally drove into the crowd.

Emergency services were called to the Mount Gravatt Showgrounds around 6.30pm on Saturday when the vehicle crashed through a barricade into a mother and her children.

As reported by the ABC, witnesses described the truck heading toward a ramp before rolling into the crowd without appearing to slow down.

Photographs at the scene also showed the crowd at the event, organised by a company called Ultimate Monster Shows, watching from behind thin temporary fencing just metres away from the stunt cars.

One child was taken to Queensland Children's Hospital with minor leg injuries.

The incident has been condemned by fellow monster truck event promoter, Clive Featherby, who runs Monster Truck Promotions Australia which was not involved in organising the Mount Gravatt event.

Featherby stated “this horrible accident at Mount Gravatt showgrounds (and) could have easily been avoided.”

Queensland Ambulance Senior Operations Supervisor Damian Gonzalez said their injuries could have been much worse, and raised questions about the event's safety preparations, telling the ABC “the potential is quite large for these trucks to go right into the crowd if they were to continue moving forward, so from our point of view it's a very fortunate incident.”

Gonzalez said there were no first aid officers at the event adding "as far as we're aware, when we arrived we weren't met by any first aiders or official first aiders on scene.

"Generally, events that include large crowds and high-risk events we would always recommend some form of first aid be on scene."

According to eye witnesses, spectators came together to push the car off the injured girl.

One advised “there weren't any marshals or anything on the ground where it happened, so the crowd … quickly jumped into action to move the car so that the little girl was okay.

"No one knew what was going on, all these kids were screaming and upset, it was quite horrific - it's honestly lucky her injuries weren't worse than what they were."

The event reportedly continued after the incident.

Queensland Workplace Health and Safety is investigating the accident.

Image: The aftermath of the incident that led to a child being hospitalised with leg injuries after a monster truck crashed through a temporary fence at the Mount Gravatt Showgrounds on Saturday. Courtesy of Instagram/Shellriconline.