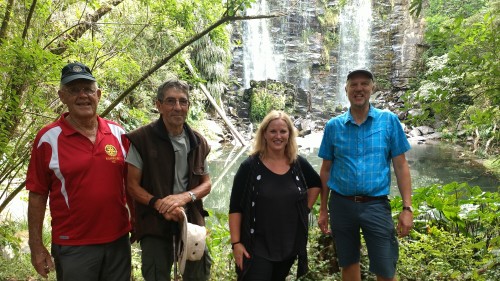 A new trail that will provide access to a hidden waterfall near Kerikeri received a Ministerial earlier this month when the New Zealand Walking Access Commission hosted New Zealand Associate Minister for Primary Industries Louise Upston for a guided walk.

The visit was organised to celebrate the work being undertaken by Kerikeri Rotary, Vision Kerikeri, Friends of Wairoa Stream and others in the community to create lasting public access to Te Wairere Waterfall.

The new 2 kilometre Wairoa Stream Walking Track, which is under development, will provide access from Kerikeri’s Pa Road footbridge to the waterfall. Te Wairere Waterfall was once popular, but has become difficult to access in recent decades as a result of the subdivision of land and the regrowth of forest alongside the Wairoa Stream’s banks.

Much of the track to the waterfall is complete and work is now underway to construct a 12-metre-long bridge across the Wairoa Stream to complete the project.

Minister Upston walked the track with representatives of groups involved in its development, and met with adjoining landholders who have generously provided access across their land for the track.

The New Zealand Walking Access Commission is the Crown entity that plays a lead role in promoting free, certain, enduring and practical access to the outdoors.

Pyle stated “this visit provided an opportunity for the Minister to see some of the fantastic trail development work being done by community groups in Northland, in partnership with local iwi and landholders. The Wairoa Stream Track is a great example of the work being done across the country to develop new public access for current and future generations.”

The bridge over Wairoa Stream is expected to be complete in April, if weather allows, and the track to Te Wairere Falls will open shortly afterwards.

1st May 2016 - NZRA CALLS FOR FRESHWATER PLANS TO GO FURTHER