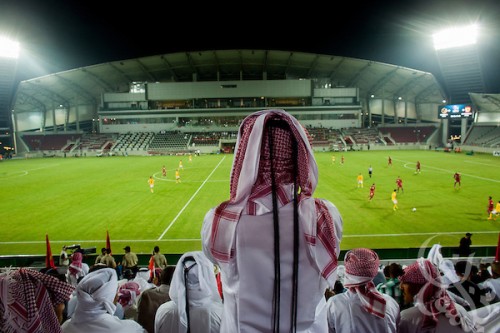 Migrant labourers in Qatar say they are being paid to fill empty seats at football matches featuring the Spanish star Xavi Hernández, who was signed to generate local interest in the game before the Arabian Gulf state hosts the 2022 FIFA World Cup.

Xavi, 35, is a World Cup winner and former Barcelona captain. At an evening match between his side Al Sadd and rivals Al Ahli last month, groups of 'fans' told The Guardian they had been paid about US8 to attend or had been given free tickets.

They included several African security guards, who wore white robes they said helped them look more like Qataris. Indian construction workers said they had been paid chant football songs in Arabic they had been taught but did not understand.

According to The Guardian, an entire end – about 1,000 spectators – comprised builders from south Asia. Musicians with drums and pipes had been hired to “create atmosphere”.

Kumar, an Indian builder who had been bussed in from a labour camp stated “we are here for the money.

“They pay 30 riyals (US8) per match. They teach us the clapping actions and some songs. They think with the World Cup people will worry that there will be nobody to watch the matches so that is why they do this.”

Michael, a security guard from Kenya, added “they are looking for bodies because there is no one to come. The Qataris are not interested. Most are busy and they prefer to watch at home. We earn a minimum amount [in our day jobs] so if you get 30 extra riyals you can feed yourself better.”

A spokesperson for the Qatar Stars League (QSL), which organises the matches, told The Guardian that it did not pay agents or fans to attend games but confirmed that clubs sometimes gave tickets to businesses “to increase club awareness”, and that tickets at the Al Ahli v Al Sadd match had been given for free to workers from a construction company that had recently renovated the stadium. It said clubs hired entertainers in the crowds “to create an atmosphere during matches”.

The spokesperson added “our goal is not to fill a stadium with people who don’t want to be there.

“Our goal is to create a professional league, with passionate fans, and in turn increase our attendance with people who really love football.”

QSL said attendance this season was up 40% on the one before.

Qatar’s successful bid document for the 2022 FIFA tournament claimed the region was “brimming with sporting passion”.