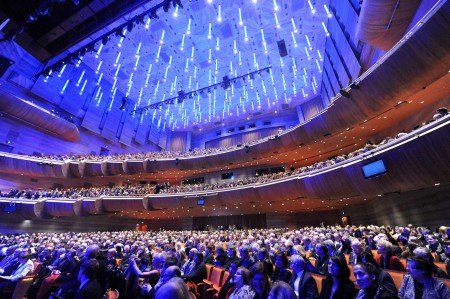 Victoria’s best performing arts talent will collaborate with leading artists from across Asia to present an unprecedented four-month program of Asia-Pacific performing arts in Melbourne in 2017.

Asia TOPA: Asian Pacific Triennial of Performing Arts, to be held at Arts Centre Melbourne and programmed by the venue's staff, was announced in Beijing last week by a delegation including Carrillo Gantner​, Chair of the Sidney Myer Fund, which has contributed $2 million, and Victorian Creative Industries Minister Martin Foley, who announced Victorian Government funding of $250,000.

Minister Foley said it was hoped the triennial would boost international engagement with Victorian arts organisations but also capitalise on booming tourist numbers from China and North Asia, stating “Asia TOPA is an exciting and ambitious program that will bring the best performing arts from across our region to Melbourne in 2017 (and) will provide an unprecedented immersion in the contemporary culture and creativity of the Asia Pacific.”

Gantner said the idea for the triennial grew out of his time as president of the Arts Centre Trust, in which he established the Kenneth Myer Asian theatre series, an endowment for Asian programming.

He explained “Asia TOPA, presented through a pioneering consortium of major Victorian arts organisations, will be the first event of its kind. It represents an exciting opportunity to celebrate Australia’s place in our own rich and diverse neighbourhood.

“I hope this will be seen as the beginning, as the first of the Triennials.”

Arts Centre Chief Executive Claire Spencer said the festival was inspired by the long-running Asia Pacific Triennial of Contemporary Art at Queensland Art Gallery|Gallery of Modern Art which has drawn more than 2.2 million visitors since its first series in 1993.

Spencer added “(APT) is a very inspiring model to have and that has been going for many years, and our aspiration is that Asia TOPA will be the performing arts equivalent.”