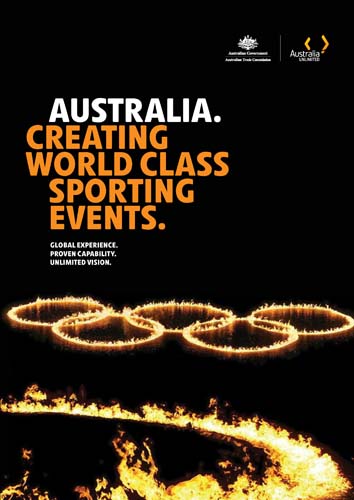 Business and sporting ties between India and Australia have been advanced with the Australian Government launching its Match Australia business networking program for the 2015 ICC Cricket World Cup.

A range of tailored business matching activities for visiting Indian business leaders can also be arranged while attending the tournament.

The 2015 ICC Cricket World Cup, which runs in Australia and New Zealand from 14th February to 29th March next year, will be the biggest sporting event in the world in 2015

With an expected television audience of a billion people and more than one million people expected to attend the tournament, Match Australia will help promote Australian capability and enhance business opportunities across trade, investment, education and tourism with India.

"This is a wonderful opportunity to see India, the reigning champions, in action and use the Match Australia business program to explore some of the tremendous trade and investment opportunities between India and Australia."

She added "we welcome Indian businesses to Australia to the ICC Cricket World Cup 2015, to not only enjoy the cricket, but to also see for yourself, the business and investment opportunities on offer and meet with Australian businesses.

"We are a major trading nation with a $1.5 trillion economy - now entering its 23rd consecutive year of growth. Australia has a great sporting events industry, but it is also home to globally significant companies across a range of industries. Australia is also known as a world class education destination. Our universities regularly rank among the world's very best.

"The Match Australia business program will connect Indian businesses with Australian partners and key business and investment opportunities in Australia."

Harnden, who put the ICC Cricket World Cup 2015 Trophy on display during the event, said the tournament would be a showcase for Australian sporting excellence.

He concluded "Australia has a world-class reputation for hosting and delivering major international sporting events and the ICC Cricket World Cup 2015 will be no different.

"We have been working very closely with governments in Australia and New Zealand to provide the opportunity for Indian businesses to network in Australia which is why we are here in partnership with Austrade today. It is important an event like the Cricket World Cup leaves a legacy for both countries, on and off the field.”