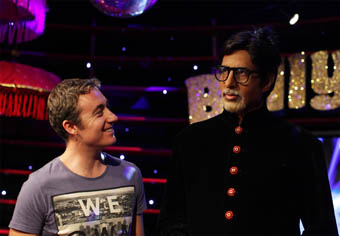 For a limited time – until December, visitors to Madame Tussauds Sydney have the chance to get up close and personal with the indisputable ‘King’ of Indian cinema in an opulent Bollywood set draped with gold and Indian textiles.

Located within the A-List celebrity zone, along with Brad Pitt, Johnny Depp and Angelina Jolie, Amitabh is dressed in a stylish long black velvet coat adorned by large gold buttons and complimented by white pants and black polished shoes.

Amitabh’s wax figure is presented in a standing position, with his hands gently clasped together and features a perfectly manicured white goatee and brown hair with silver flecks, while his eyes look thoughtfully into the distance.

A famed actor, producer and presenter, Amitabh Bachchan made his name from Bollywood movies in the ‘70s like Anand (1971), Zanjeer (1973) and Deewar (1975). He has, to his credit, three National Film Awards and 12 Filmfare awards.

Bachchan had at least one hit movie every year for 15 consecutive years from 1972 to 1986. Bachchan has lent his voice to or starred in over 100 Indian movies. In 2007, he starred in his first English-language movie titled The Last Lear. It was premiered at Toronto International Film Festival and is now regarded as one of his best performances of all time.

In addition to this, Amitabh was, for the first time in the history of Madame Tussauds, nominated to be portrayed by fans in a world-wide internet poll. Amitabh undertook a sitting and is portrayed from the year 2000.

“Amitabh adds even more colour and interactivity to our attraction, and the amazingly lifelike wax figure has already been extremely popular with our guests, particularly the local Indian community.

“The Bollywood industry is one that is growing exponentially and we are certainly very proud to be able to offer our guests a taste of it right here in Sydney.”

For more information on Madame Tussauds Sydney go to www.madametussauds.com/sydney

3rd March 2014 - MADAME TUSSAUDS TO OPEN IN BEIJING, LEGOLAND TO BE DEVELOPED IN DUBAI