Local companies and organisations have given millions of dollars in funding partnerships for a new sport and health centre being built at the Hawke’s Bay Regional Sports Park in Hastings.

The centre, called the EIT Institute of Sport and Health, is being built, owned and operated by the Hawke’s Bay Community Fitness Centre Trust. The Trust is a charitable organisation with governance representation from Eastern Institute of Technology (EIT), Sport Hawkes Bay, Hawke’s Bay Sports Events and Education Consortium and four independent trustees including Trust chair Sir Graeme Avery.

EIT has the naming rights to the new centre and Professor Natalie Waran, the Executive Dean for the Faculty of Education, Humanities and Health Science and Chair of One Welfare said EIT saw the establishment of the new Institute as a way for it to develop a greater reach to find methods for addressing regional health challenges.

“The EIT Institute of Sport and Health expands EIT's activities by creating another learning facility/location for students and for our community. Students will have the opportunity to develop through project-based learning which includes being involved with running quality community health and exercise programmes and by conducting community-centred research that will help improve the health and wellbeing of Hawke’s Bay people.”

“The development of the new Institute of Sport and Health provides students with a wonderful opportunity to learn in a real-world environment working closely with different groups of people, tackling real community health and wellness issues and taking advantage of working alongside experienced practitioners from different backgrounds,” Professor Waran said.

The naming partner of the Indoor Sports and Recreation Hall is local supermarket, Hastings Pak’nSave. Owner Operator Brendon Smith said that when Sir Graeme approached him about supporting the project, “it ticked all our boxes”.

“We are already heavily invested in the community through local schools and have supported netball for about 12 years, so the vision Sir Graeme had for local schools, in terms of education, eating well and getting them into regular physical activity and sport, is pretty much what we want to do.”

“I am just looking forward to the facility getting going and wish other people would get in behind it and contribute funding to it. It is going to be a world class facility.”

Smith said his Hastings Pak’nSave planned to have further involvement in the Institute beyond the initial naming rights funding of one million dollars.

“The Trust is looking at putting on a bus to get kids to the programmes. I have indicated that I am really keen on either buying a bus for the facility or paying for the running of it.”

Another key part of the Institute is an accommodation hostel, which will host school groups, sports teams and individuals participating in programmes at the facility. Making this possible is owner of the Bluewater Hotel in Napier and entrepreneur, Rodney Green. 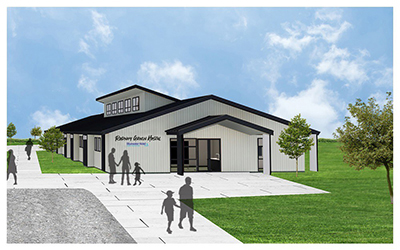 The new hostel will be called the Rodney Green Hostel. “I have supported several other initiatives over the years and I just love giving back to the people of Hawke’s Bay who have supported my businesses during my career,” Green said.

He said he was excited about the new Institute because it would be a major motivator for health and fitness, particularly among the children of the region.
“I am certain we will see the benefits very quickly. It is not just a fitness and healthy eating thing, it is a mental benefits thing as well.”

Green said he was contributing one million dollars initially but was prepared to help with more in the future.

Royston Hospital in Hastings is the naming rights partner for a Community Health and Fitness Centre and associated outdoors Community Fitness Trail that will be an integral part of the new facility.

Dr Jonathan Coleman, the Chief Executive of Acurity Health Group, which owns Royston Hospital, said they were proud to be supporting the institute in a 10-year partnership agreement.

“The million-dollar support demonstrates our strong commitment to the Hawke's Bay
community and helps us to engage with the community to promote better health and
well -being for everyone, including our own staff, patients and their families.”

“The investment will ensure the centre can offer engaging individual and community-level programmes to make being physically active easier.  A healthier population means social and economic benefits for the entire Hawke's Bay region and we're delighted to be part of that,” Dr Coleman said.

The General Manager of Royston Hospital, Denise Primrose, said the hospital was excited to be associated with “such a positive initiative for our Hawke's Bay Community”.

“Royston Hospital has a history of strong community involvement and follows a partnership approach to engage directly with the communities within which we work.”

Stuart Signal, a trustee of the Royston Health Trust said it had a wide-ranging brief to apply its funds for health-related initiatives, preferably with projects of some scale.

“The vision of Sir Graeme Avery in promoting the Institute fits well with these objectives. The Trust is currently supporting a project to design a longer-term research study into obesity intervention.

"Concurrently, healthy physical activity and nutritional education programmes are being piloted in local primary schools. The Trust would expect these initiatives to provide meaningful guidance on effective measures to improve community health and well-being."

One of the early supporters in getting the project off the ground was Hastings District Council, which has committed $4 million funding in support of the project. The Mayor of Hastings Sandra Hazlehurst said the Council was proud to support the new Institute.

“This facility and its programmes are unique to our region.  It will be available to the wider community and will make a huge contribution to sport and recreation in Hawke's Bay."

"The project will be transformational for Hawke's Bay.  We support this endeavour to benefit our people and we are proud to back this initiative which will help our people overcome barriers to joining in social, recreational and sports activities," she said.

Sir Graeme said the project would not have been possible without the support of local organisations and businesses.

“It is fantastic to see such widespread local support because it shows that these organisations care for the Hawke’s Bay community and want to see the health and wellbeing of our people, especially our children, improve through the wide range of programmes that will be available, including at satellite facilities in Waipukurau, Flaxmere, Maraenui and Wairoa.”

“I was struck by the eagerness of our funding partners to get involved and the genuine excitement they have in playing a role in improving the health and wellbeing of our community,” Sir Graeme said.

The Trust’s operations and commercial manager, Brendon Rope, said the backing of the partners meant the focus could now be on working towards the opening of the Institute next June and ensuring that its programmes would run well and that it would be a commercial success.

“There is a lot of work to do to get ready for opening. We are all excited about this venture and look forward to seeing our facility as a hub for sport, health and wellbeing excellence,” Rope said.

When the EIT Institute of Sport and Health is completed, it will be a world-class regional facility, supported by an on-site Sports Medicine centre and the EIT sports science research lab.

“It will be without parallel in regional New Zealand,” said Sir Graeme.

Images: The concept for new EIT Institute of Sport and Health main building  (top) and the Rodney Green Hostel (below).