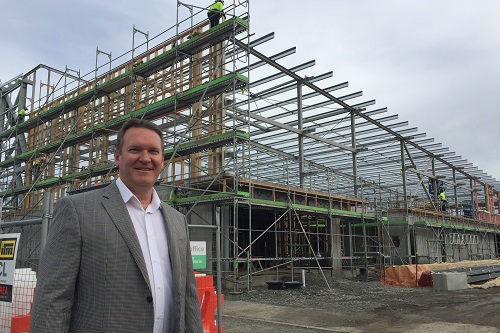 Rope, a former Chief Executive of the Pettigrew Green Arena in Napier, will manage the new EIT Institute of Sport and Health currently being constructed at the Hawke’s Bay Regional Sports Park in Hastings.

In his new role, he will be responsible for getting the facility ready for opening. He will then run the Institute’s operations and commercial activities.

Trust Chairman Sir Graeme Avery said he was pleased to have such an experienced person joining the team at such a critical stage in the project, advising “Brendon is a good operator who will certainly add value to the Trust team. He is also committed to Hawke’s Bay and wants the best health and sports outcomes for the people of the region.

“We are thrilled that he has come on board during the construction phase so that he can play a vital role in getting ready for opening. His expertise in managing facilities like this will certainly contribute to the success of the Institute.”

Rope said he believed the new facility would have a big impact on Hawke’s Bay, commenting “I am excited to get back into the sport, fitness and recreation sector again, particularly with such a significant project that has such a bold and ambitious vision for the region and the health of its people.

“It is nice to have the high-performance sport component because it is aspirational for the population, but more importantly, if we can get better health statistics for our region, that is the big winner.”

Rope has strong skills in facility management, programme integration and general business management. His experience also includes being regional manager of Eastern Netball, as well as roles in touch rugby at a national level and regional sports trusts. During his time as Chief Executive of Pettigrew Green Arena, the fitness centre there won three national awards.

Construction on the $15 million first phase of the Stage I Institute began earlier this year with completion of the main building and indoor sports hall and community gym expected in April next year, for opening by mid-2019. The building is being constructed by local company MCL Construction.

Phase II of Stage I, construction of an accommodation hostel, is expected to start later this year. The third phase of Stage I is expected to begin later next year and will be an extension of the building.

Stage II, which is still a few years off, will see the building of an Aquatic Centre with a 50 metre Olympic pool and a learn-to-swim pool.

The Institute will have programmes promoting healthy lifestyles, special programmes for at-risk youth and community health and wellbeing programmes, as well as the development of talented local sportspeople.

The institute's work will not be limited to the facility itself, as staff will team up with recreation centres in Waipukurau, Flaxmere and Wairoa to deliver satellite services.

Image: Brendon Rope at the under-construction EIT Institute of Sport and Health.