With work now completed on the two national facility strategies, for aquatic sports and indoor sports, Sport NZ has its best picture ever of New Zealand's aquatic, recreation and sport facility network.

The work has been the culmination of over 12 months of consultation with National Sporting Organisations, Territorial Authorities, Regional Sports Trusts, funding agencies and other key stakeholders.

Sport New Zealand National Advisor for Facilities Richard Lindsay has acknowledged that "on commissioning this work we knew it was going to be very challenging but we needed a better understanding of our aquatic and indoor sporting network to provide guidance and direction to the sector."

Sport NZ, in its drive to provide a network of world class sporting facilities and infrastructure, will use the national strategies as a framework on which to build on for the future.

Lindsay, who explains the development of the strategies in a feature in the January/February 2014 issue of Australasian Leisure Management, added "it was our aim that we had a clear guide on future priorities for investment but we needed better information to provide decision makers and investors on what was happening in the sporting facility landscape. This would hopefully ensure in future that facilities were appropriately scaled to meet the needs of their communities and supported or enhanced the wider facility network."

Although the national facility strategies were completed separately they had the following over arching key objectives:

• To provide a picture of current and future facility needs locally, regionally and nationally in New Zealand.
• Identifying the challenges between competitive and community use of facilities and to offer potential solutions to asset owners and operators.
• To highlight the current state of the sports facility assets and make suggestions on the priorities for the future.
• Identify any gaps in the current provision levels to inform and guide key stakeholders in making strategic planning decisions.
• To provide a sporting facility framework for key partners, this would be inclusive and accessible for all. 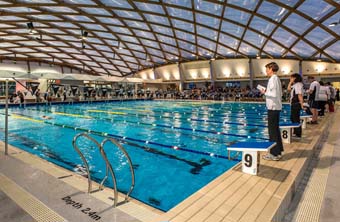 • In terms of the stock of sporting facilities in New Zealand there is currently an over supply of indoor courts and pools based on benchmark estimates. There are currently 30 more indoor courts and 18 more standard sized pools for the scale of population. This brings the national averages to 21,000 people per court, and 21 people per square metre of total pools available.
• The national figures however mask regional differences of sports facility distribution with some regions having an under supply of indoor courts, Auckland, Waikato and Canterbury. This is offset with an oversupply in Wellington, Taranaki and Southland.
• This uneven pattern of facility distribution holds true also for aquatic facilities with additional standard pools being required in Northland, Auckland, Bay of Plenty and Hawkes Bay which have current shortfalls. However, provision levels in the Waikato, West Coast and Manawatu-Wanganui would indicate a higher level of standard pools above the New Zealand benchmark.
• In terms of the capacity of the sporting facility network indoor court provision currently meets demand with the exception of Auckland, Canterbury, Gisborne, Hawkes Bay and Northland.
• Across the community aquatic network there are additional standard pools required in Northland, Auckland, Bay of Plenty and Hawkes Bay which have a current shortfall.

As Lindsay concludes "the work has clearly identified that there is in some cases substantial differences in the supply of facilities in particular regions, as ranges for provision for indoor courts have been between 53,000 people per court to 6,000. Prior to this work being undertaken, we didn't have the robust data that we have today to inform decision makers so hopefully going forward this will mean better decisions being made across the facility network."

Richard Lindsay's feature, 'The Big Picture', can be read in the January/February 2014 issue of Australasian Leisure Management.

He can be contacted at richard.lindsay@sportnz.org.nz

Images: Auckland's Tepid Baths (top) and the Coastlands Aquatic Centre in Paraparaumu (below).