Lack of motivation preventing Victorians from getting active 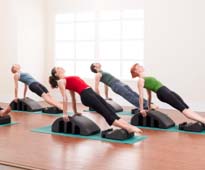 New research released by VicHealth shows that it is not busy lifestyles that prevent people from exercising but a lack of motivation to get active.

VicHealth’s survey of more than 2,000 Victorians looked at the key barriers to physical activity with results revealing that only one in four of those surveyed think that they don’t have time to exercise, while half (51%) agree that a lack of motivation stops them from doing physical activity.

VicHealth Chief Executive Jerril Rechter said the survey results revealed a difference between women and men, with 55% of the Victorian women surveyed lacking the motivation to exercise, compared with 46% of Victorian men.

Rechter stated "women also found the cost of maintaining an exercise regime more prohibitive than their male counterparts, with two in five women pointing to the price tag as a barrier to getting active, compared with one third of men.

"What does inspire us, the survey suggests, is the buddy mentality, with nearly three in five people (57%) more likely to take part in physical activity if they do so as part of a group, or with a partner.”

The survey was undertaken as part of VicHealth's TeamUp campaign, which aims to encourage Victorians to buddy up and remain active. TeamUp is a free app and website which allows users to search and join free and low-cost activities in their local area. With two thirds of adults classified as overweight or obese, TeamUp is designed to motivate people to be active and stay active.

Rechter said breaking down the psychological barriers to exercise is key to reducing the level of physical inactivity in Australian adults, adding “we need to dispel the idea that being active is too expensive and too time-consuming; for many people, this can perpetuate the cycle of inactivity when in fact this survey tells us that it’s a lack of motivation that’s preventing Victorians from getting active.

"What VicHealth wants to see as a result of the TeamUp campaign is people embracing physical activity in their everyday life and enjoying it more by teaming up with others. Taking a walk with their TeamUp partner after dinner, trying a new class with friends on the weekend, or even getting just a half an hour of activity into their workday,” Ms Rechter added.

From organised activities like Pilates and netball to more recreational pursuits such as biking and walking groups, TeamUp features activities for all fitness levels and interests.

VicHealth's TeamUp app is free, easy to navigate and users can create their own activities at the click of a button.

For more information go to www.teamup.com.au.

Note: The Community Attitudes Survey was commissioned by VicHealth and undertaken by an independent agency. The survey captured responses from 2018 Victorians aged 18 and over.