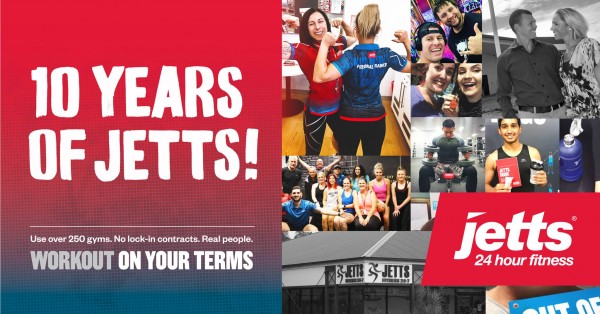 Leading 24/7 fitness chain Jetts Australia has recently passed a significant milestone with it having been 10 years since founders Brendon and Cristy Levenson and Mark Stocks established their first gym at Helensvale on the Gold Coast.

Opening their first club in August 2007, the rapid growth of Jetts' franchise model was underpinned by the use of a proprietary 24/7 access system that enabled members to access the clubs at any time, day or night, even when unattended by staff. Access was backed by 24 hour video surveillance and emergency assistance stations within each club providing a safe, convenient environment for all members.

Transforming the local fitness landscape with its low-cost franchise model and no lock-in contracts, within 30 months Jetts was operating 50 clubs. Within just four years of operations, by August 2011, it had 100,000 members.

Growing to a network of 270 clubs across Australia, New Zealand, Thailand and the Netherlands - and with more than 200,000 global members - in September last year Jetts was acquired by private equity firm Quadrant in a deal reported as being worth $100 million.

Jetts now operates as a division within the Fitness and Lifestyle Group.

Current Jetts Fitness Chief Executive Elaine Jobson, who last month was named Outstanding Business Woman of the Year at the Sunshine Coast Business Women's Network 2017 awards, was recently interviewed by news.com.au about the ongoing success of the Jetts model.

Jobson explained "our customers are young (and while) we have all sorts of ages, we really do attract a high volume of 20-somethings because we’re really affordable, especially for students, and we don’t do contracts.

“It’s really hard for young people to lock themselves into a 12-month contract. They like the flexibility and we’re cheap. 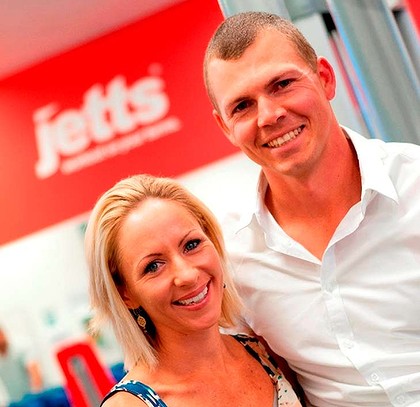 Commenting on staffing and security, Jobson advised “security and safety is a fundamental part of our business.

“We have a sophisticated security system - you swipe your card and that opens the door - and we have alarms all over the club.”

Explaining that it members feel any type of threat, Jobson stated that they “push the alarm and that goes straight through to security ... and we (also) have 24-hour CCTV.”

While Jobson advises that there is a 60:40 ratio of male and female members, she adds “women feel very secure (in our facilities) The gyms are very well lit and it’s all on one level and open-plan. Nobody can come in without seeing them and nobody can hide.”

As for who uses 24/7 gyms in the middle of the night, Jobson concluded “shift workers are our bread and butter ... but only 20% of our members will train between 10pm and 4am. The majority will come in normal hours.

“Sometimes I think it’s a perception thing. When people join they think they are going to come in at strange hours, but that doesn’t necessarily happen.

“At night, interestingly, we get lots of families training together. It’s often the only time of day they can all get together.

“Women with babies ... they tend to come out between 8pm and midnight (while) their partners come home and they have dinner and that’s their ‘me time’.

“Women and babies are on a different time zone to the rest of the world. They train at 2am because that’s the only time they can train.

“And then there’s people who are relatively new to exercise. They like the lack of intimidation and that there’s not lots of people looking at them.”

Remarkably, Jetts appears to have not celebrated its 10 year anniversary in any significant way, with a single Facebook post from mid-August announcing "Hip hip hooray!! Today marks 10 years since Jetts Australia revolutionised the Aussie fitness landscape by introducing low-cost 24/7 gyms with no lock-in contracts! Come on down to our first gym Jetts Helensvale today to celebrate with us!"

Images: Jetts marks 10 years on its Facebook page (top) and founders Brendon and Cristy Levenson (below).