Inflatable waterparks the ‘big thing’ of the summer 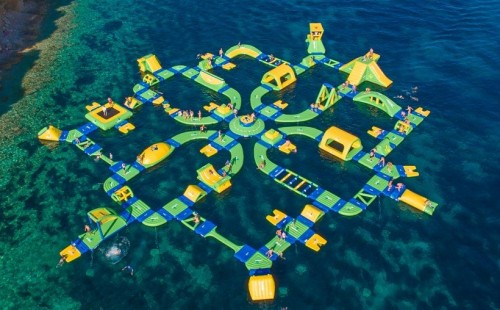 Looking at trends for the leisure industry, aquatic play, already a popular activity, looks set to be the ‘big thing’ of the peak summer months and 2016/17 school holidays.

Having been introduced to Australia just a few years ago, inflatable aquatic playgrounds are undergoing considerable growth. Following the success of operators in Queensland new parks have opened on Lake Lyell in NSW and, at the beginning of November, at Lake Mulwala on the Murray River.

Other similar attractions are coming to Rye on Victoria’s Mornington Peninsula, the Gosford waterfront in NSW and Geelong’s Eastern Beach.

In Geelong, operator Melbourne Waterparks is planning to invest $100,000 on a park offering a range of slides, trampolines, swings and connected obstacles.

Accessible from Geelong’s swimming enclosure boardwalk, the playground would host up to 80 people during its daily run until mid-February.

On the Brisbane Water in Gosford, AquaSplash which operates similar attractions at Southport on the Gold Coast and Airlie Beach in Queensland, is investing $400,000 in its new facility. 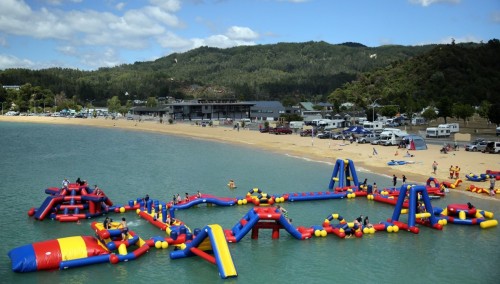 Following AquaSplash’s success on the Gold Coast, Gold Coast City Council has recently released ‘an invitation to offer’ looking to attract other similar attractions at different locations in its local government area.

For investors and operators in inflatable aquatic playgrounds there is an exciting range of equipment available from leading suppliers including New Zealand-based Aflex Technology and German manufacturer Wibit Sports, distributed in Australia by Hydrocare Pool Services.

Wibit, which recently marked 20 years of operations, is a constant innovator with its products, and has led the industry with its modular design operations.

Aflex, a more recent producer in the sector, has used its knowledge of constant air flow waterborne inflatables to develop its range.

While these suppliers lead the industry with their designs, the sector has seen a number of lower cost and counterfeited products enter the market, leading Wibit in particular to defend its intellectual property through taking legal action against imitation products – even moving against two businesses that had been operating fake Wibit inflatables in Australia while also getting counterfeit product suppliers ejected from international trade shows.

Unfortunately, these products, often of lower cost and quality, do reach the market leading to reports of some equipment performing poorly and having a limited lifespan. 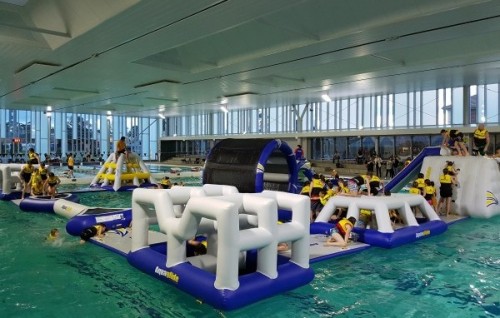 In operation, inflatable aquatic playgrounds need to meet key criteria in terms of depth of water, the site having no obstacles or entanglement, sites open to the ocean having sharknetting, users wearing of life jackets and appropriate training of life guards and supervisory staff.

Being sealed units, inflatable aquatic playgrounds are not covered by an Australian/New Zealand Standard. However, the introduction of these units to commercial swimming pools raises an anomaly in that constant flow units in such a pool are governed by a Standard while sealed units are not.

With the addition of the Occupational Heath and Safety Regulation’s requirement to register designs for all inflatables above 3 metres in height delayed until 1st January 2018, issues relating to licensing and safety of these devices are currently in urgent need of clarity.