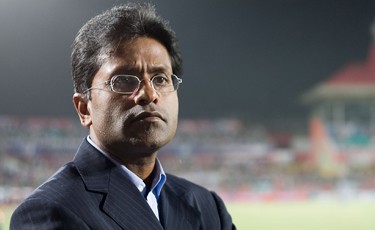 Modi, has been replaced by Chirayu Amin as IPL Chairman and has been removed from his position as Vice-President of the Board of Control for Cricket in India (BCCI).

Modi has also lost his role as chairman of the Champions League Twenty20, a club tournament organised jointly by India, Australia and South Africa.

Since April, Modi has been under investigation for wrongdoings by the BCCI and the Indian government, which has charged him with a number of corruption offences.

Modi's replacement at the IPL, Amin, is a successful businessman and cricket administrator with a reputation that contrasts to Modi's controversial image.

Amin, chairman of a pharmaceutical group, is viewed as having the professional management and finance skills needed to develop the lucrative but tarnished Twenty20 tournament.

It has been reported that Modi will be replaced as one of five vice-presidents of the BCCI by Rajiv Shukla.

Shukla is a ruling party politician who is currently head of the BCCI media committee.

Modi's troubles began in April when he revealed via social networking site Twitter the ownership details of a new franchise set to join the IPL in 2011.

The Indian Government then launched an investigation into the IPL, which led to multiple charges against Modi, who continues to be investigated by a three-member disciplinary committee set up by the BCCI.

Modi was also head of the BCCI's marketing committee - and the increased prominence of Indian cricket in general, and the IPL in particular, had made him one of the most powerful men in world cricket.