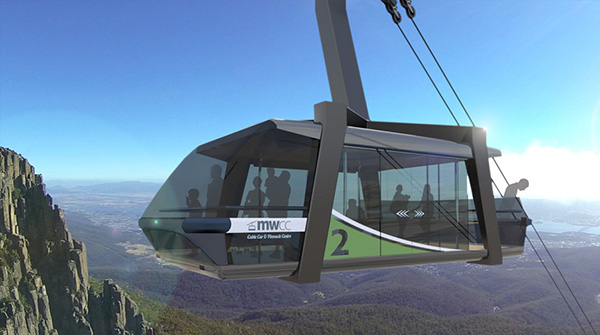 An independent report recommends Hobart Council should refuse a planning application to build a controversial cable car on kunanyi/Mount Wellington because it will diminish the tourism, recreational, cultural and landscape values of the mountain. The report has been published today on the City of Hobart’s website.

The development application, lodged by the Mount Wellington Cableway Company, received 16,500 public representations, of which nearly 72% were against the proposal.

The report recommended Hobart Council refuse the cable car application for 21 reasons, including that the plan was "not consistent with the values of Wellington Park" and would adversely affect the area due to its scale, mechanisation and emissions.

The report will be considered by the Hobart City Council, acting as the Planning Authority, at a Special Meeting next Tuesday 27th July.

City of Hobart Chief Executive, Kelly Grigsby said the 1300-page planning application and 16,500 public representations had been carefully considered by an expert assessment panel against the provisions of the Hobart Interim Planning Scheme 2015.

Grigsby notes “assessing a project of this nature is a huge task, which is why the City engaged external planning professionals with extensive experience dealing with large and complex development applications to work alongside our own knowledgeable and experienced staff.

“Like any planning application assessment, the process undertaken has been in line with our statutory obligations, and we are proud of the enormous effort that has been put into maintaining a comprehensive and professional process.

“This is arguably one of the most important planning assessments undertaken by this organisation and I thank everyone involved for their contribution.”

In assessing the development application, which also includes a restaurant, cafe, bar and amphitheatre, independent planning assessors argued the proposal failed to meet acceptable levels of noise emissions for nearby residents.

The report also recommended the project's refusal as the noise emissions "have the potential to cause environmental harm" on McRobies Road.

The application also found that the cableway would have a significant impact on swift parrot habitat, as the cableway's bushfire plan requires the endangered bird's habitat to be cleared.

The proposal also does not avoid or sufficiently remedy adverse impacts on the geoheritage values of geoconservation sites: Organ Pipes Columnar Jointing and Wellington Range Periglacial Terrain as listed under the Tasmanian Geoconservation Database.

The Hobart City Council, acting as the Planning Authority, will officially vote on the proposal at a special council meeting on Tuesday, 27th July, which will be live-streamed from 5:00pm via the City of Hobart’s YouTube channel (youtube.com/c/CityofHobart) with members of the public encouraged to watch the meeting from their homes.

All those who can’t access the livestream at home is invited to attend Mathers House, located at 108-110 Bathurst Street, Hobart.