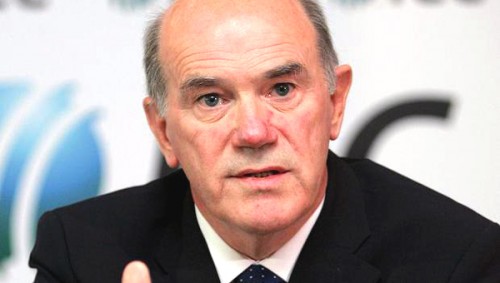 Sir Ronnie Flanagan, the new head of the International Cricket Council's anti- corruption unit, has vowed to tackle match-fixing with zero tolerance when he begins his new post, amid fresh concerns over corruption.

Flanagan, the former Chief Constable of the Royal Ulster Constabulary, will take over as Chairman of the ICC's Anti-Corruption and Security Unit (ACSU) when Lord Paul Condon retires at the end of next month.

Lord Condon's work over the last decade has been widely praised but as he departs there have been concerns over Pakistan's recent tour of Australia and also the emergence of 'spot-fixing' or 'micro-fixing', where specific elements of the game, such as the number of wides to be bowled in an over, can be gambled on, rather than the result.

Speaking at a press conference at Lord's, Flanagan explained "my personal message is that if anyone is thinking about fixing, we will find them and deal with them â¦ my message is to forget about it. We exist to pursue rigorously the policy of zero tolerance on corruption. We cannot be complacent and I will not be."

Recent controversy has surrounded Pakistan's performance in the Test match at Sydney Cricket Ground in January. Australia's 36-run win, despite conceding a first-innings deficit, has led to allegations of match-fixing, with a parliamentary committee in Pakistan summoning top officials to answer questions.

Pakistan Cricket Board (PCB) Chairman Ijaz Butt, Tour Coach Intikhab Alam and former captain Younus Khan were among those summoned after video footage of a PCB meeting was leaked to the media, showing players and former officials raising suspicions about fixing during the Australia tour.

Speaking of the Test, Lord David Condon explained that it has been subject to "an ongoing investigation", adding "it is a match and series that worried us, we spent a lot of time talking to the players and PCB. The challenge is finding where is the solid fact.

"What you have there is a lot of strife within the team and Pakistan politics with rivals camps making allegations.

"We are satisfied that was a totally dysfunctional tour from a Pakistan point of view. The dysfunctionality in the dressing room led to players not performing well to maybe players potentially underperforming deliberately."

The performance of wicket-keeper Kamran Akmal has been highlighted after he dropped three catches and missed a straightforward run out.

Lord Condon added âwhat we are trying to establish is whether that was because rival camps wanted to do down captains or potential captains, or whether they were doing something more serious, for a financial fix."

Condon admitted the problem of match-fixing will never fully disappear, although he is satisfied with the way corruption was tackled during his reign.

Lord Condon added "one or two mix with the wrong people and are tempted to do these spot-fixes, so the challenge for the game is to stop that small minority getting seduced by them.

"My prediction is you will never totally eradicate it from cricket. There will always be that temptation. But we had a cadre of modern players who know the risks and are playing for the right reasons."