In the lead up to the 2018 AFL season opener, IBISWorld has explored the 2017 financial results of the AFL clubs vying for this year’s premiership, providing a score card on their fiscal performance.

Clubs backed by hospitality and gambling
Collingwood, Hawthorn and West Coast retained their position as the top three revenue earners in 2017, maintaining their dominance as financial powerhouses. However, Collingwood and Hawthorn relied heavily on gaming and hospitality revenue.

IBISWorld Senior Industry Analyst, Nick Tarrant explained “the AFL is pushing hard for the clubs to reduce their dependence on hospitality and gaming revenue, but it remains clear that certain clubs rely heavily on their corporate hosting and pokies revenue streams. The three top clubs received the least funding from the AFL.

In other revenue highlights, Essendon’s revenue grew by 22% following the end of the doping scandal. The club’s home ground attendances were up 50.6%, with that translating into a 38.8% increase in match-day sales and membership revenue.

Tarrant added “Richmond’s increased revenue grew on the back of a 36% rise in home ground attendances, a 28.3% increase in sponsorship revenue and a full-year’s worth of revenue from Aligned Leisure, the club’s health and recreation business.” 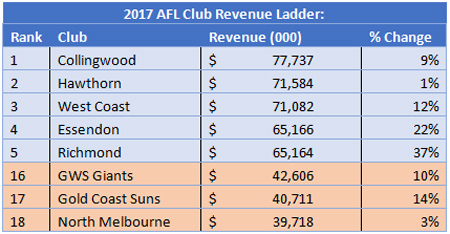 Highest Profits
The biggest winner in terms of annual profits, West Coast was at the top of the table, having posted a sizeable profit of $12.4 million in 2017.

At the opposite end of the profit scale, the heaviest loss was Collingwood, which recorded an operating loss of $2.7 million.

However, IBISWorld notes that Collingwood recorded an operating profit of $6.1 million from its function centres and gaming venues alone, with Tarrant explaining “this again highlights Collingwood’s reliance on hospitality and gaming revenue streams.”.

AFL Funding
North Melbourne and St Kilda are the two established clubs that rely the most on AFL funding. North Melbourne received 41.1% of its revenue ($16.3 million) from the AFL, with St Kilda at 43.0% ($20.6 million).

2017 was a particularly tough year for North Melbourne. As Tarrant explained “the team struggled significantly on and off the field, with attendances down by 19%, the largest fall in the league.”

Membership sales and gate receipts were down by over 12% as a result.

Topping the AFL funding ladder for 2017 was the Gold Coast, a team that received an enormous $24.7 million in funding from the AFL, an increase of $5.6 million from 2016.

Here Tarrant explained “the Gold Coast relies heavily on AFL funding to stay afloat, with the national league propping up the club with over 60% of its revenue.”. 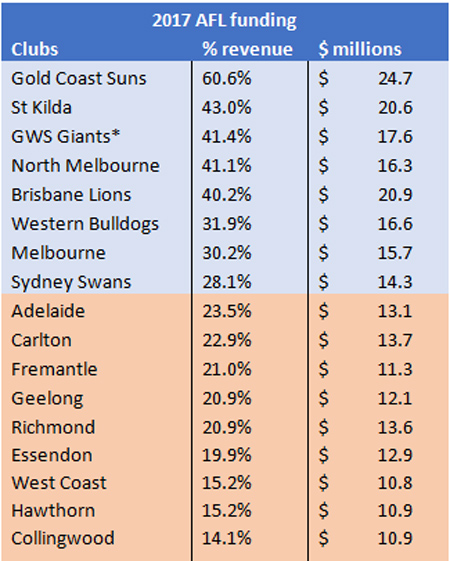