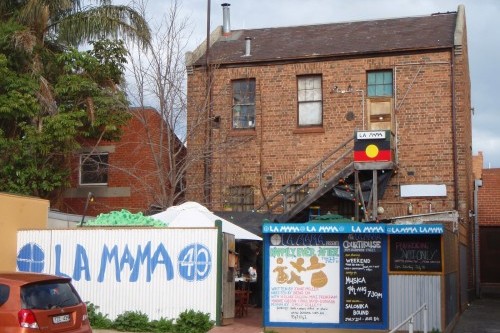 Melbourne’s La Mama Theatre, one of the city’s most significant and long-standing independent playhouses, has been destroyed in an overnight fire

Melbourne’s Metropolitan Fire Brigade (MFB) advised that it received a call about a blaze at the Carlton location “shortly after 5am” on Saturday morning. About 50 firefighters arrived at the Faraday Street theatre in less than six minutes to find the two-storey brick building “fully ablaze”.

Having brought the blaze under control the MFB has advised that there has been “substantial damage” to the building, which also advised people to avoid the area if possible due to smoke.

The MFB did not advise of the cause of the fire but its specialist Fire Investigation teams are currently investigating.

Commander Carter said while firefighters had been able to prevent the fire spreading to neighbouring properties, some shops on Lygon Street needed to be closed for the day because of fears the theatre building could collapse.

The MFB are using a drone to assess the structural integrity of the building.

Commander Carter told the ABC "what's really sad about this, it's a heritage listed building, it's well-loved, it's been a business that's operated in the community for a really long time and that's evident by the scenes out in the street with a lot of people crying, a lot of people very emotional about the loss of this icon.

ArtsHub reports that “the brick building which houses the ground floor theatre and the office-cum-dressing room on the first floor has been badly damaged. The interior floor and staircase, and the roof have collapsed … costumes for the current La Mama production, Bully Virus, have been destroyed, along with all office fittings, records, and artworks.”

One of those surveying the damage on Saturday morning was La Mama Chief Executive Liz Jones, who has been involved with the theatre company for 40 years.

Jones added "it's where so many people who are now household names cut their teeth, but more importantly than that again, it's like where most people in theatre got their start, or passed through it in some way.

"It's a very small space but it had a very big history and a very, very important place in the heart of the creative community of Australia really, not just Victoria."

She said the company would rebuild, concluding “support is just pouring in from people - people can't believe it."