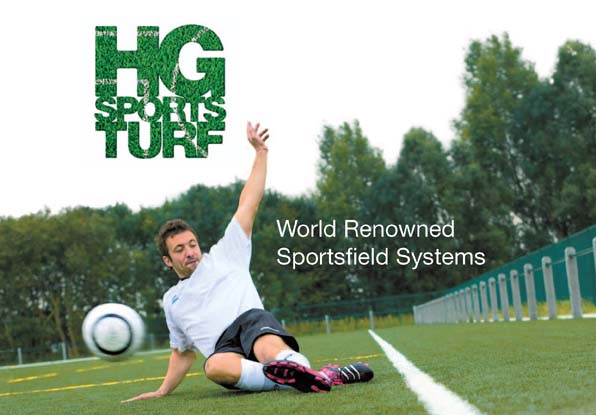 Leading Australian turf and artificial turf specialists HG Sports Turf has ended 2013 with the announcement of that it has been recently appointed on two major Australian sports field projects.

The Perth Hockey Stadium has selected HG Sports Turf to install its Greenfields TX, the same surface the 2014 World Cup will be played upon in the Netherlands.

HG Sports Turf has also been appointed by Football NSW to construct two new 3G artificial turf football pitches for their state football facility, with works due to commence in early 2014.

HG Sports Turf is well renowned for providing high quality natural sports turf and its Eclipse stabilised turf to the leading stadia in Australia and New Zealand, including the MCG, and the Etihad, ANZ, NIB and Eden Park stadiums. Coupled with this expertise in natural and stabilised natural turf, the company has also gained a strong reputation for delivering elite synthetic turf sports fields across many different sporting codes including AFL, cricket, football, rugby and hockey.

To ensure that HG are leading the field in offering the widest range of sports turf solutions, HG are also able to offer both Desso Grassmaster (used in many of the top English Premier League clubs and also widely in Europe) and Greenfields Xtragrass, which are 'hybrid' natural and synthetic turf solutions allowing much more intense use of natural turf sports fields.

In order to support and enhance the growth of the business, HG Sports Turf have also announced several recent appointments to their senior management team.

Nathan Humphreys joined the team in late 2012 and is the Regional General Manager responsible for ACT, NSW and Queensland. Humphreys has been involved with sports turf management and construction since 1998 based in Australia, USA and UK.

The team has also been joined by Erik Kinlon who is servicing the market in Victoria, South Australia and Western Australia as Regional General Manager.

Kinlon, a qualified greenkeeper and golf course manager was the Superintendent at The Buckinghamshire Golf Club and spent ten years working on golf courses.

Moving across to sports turf construction six years ago, he gained most of his experience in the UK before moving to Australia in 2012.

Humphreys and Kinlon both report to Steve Greene as General Manager for HG Sports Turf and work closely with Managing Director Hamish Sutherland and the Regional General Managers to help develop and grow the business, ensuring that HG's products and service remain industry leading.

Greene has been working in the sports turf industry for the past eleven years in the UK, most recently as Managing Director of White Horse Contractors Limited and was actively involved in the construction of the London 2012 Olympic Park, Chelsea FC's 152 acre training centre and the construction of nine turf pitches for the FIFA Club World Cup in Abu Dhabi.

Commenting on these recent success and expansion, Hamish Sutherland explained "these are very exciting times for HG Sports Turf as we grow our business across Australia, New Zealand and Asia and the addition of both Steve and Erik to the senior management team is an important step for us.

"Steve's experience in both natural and synthetic turf construction right up to global elite level, along with Erik's experience in constructing cricket and other fine sports turf projects, complements our own skills and capabilities perfectly."

HG Sports Turf is a family owned business known for the quality of its products and services. Since 1999, HG has supplied natural turf and stabilised turf (natural and synthetic turf combined) to the sports field market. During this period HG Sports Turf has designed and constructed many sports fields, including the Melbourne Cricket Ground, the Brisbane Cricket Ground, Eden Park and AMI Stadium, and installed its patented stabilised turf for international