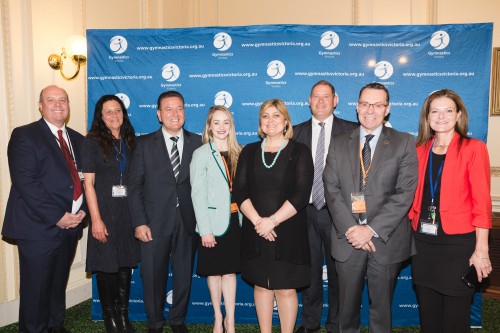 The Parliamentary Friends of Gymnastics Group had its inaugural function at the Parliament of Victoria on Wednesday 18th October with over 100 people in attendance including Ministers and members of the Gymnastics community.

Gymnastics is the fastest growing major participation sport in the State with over 700,000 participants and an 80% female demographic. This increase in participation has meant that despite 130 Gymnastics Clubs across the state, there are 9,200 children on Gymnastics waitlists which indicates that more gymnastics facilities are required to support the growth of the sport.

The evening’s formalities included an address by Minister for Sport John Eren and Shadow Minister Tim McCurdy, as well as an interview with dual Olympian Larrissa Miller and a chat with Special Olympics Gymnast Amelia Hall and her mother Dee.

Gymnastics Victoria Chairman Michael O’Neill closed the function highlighting the support gymnastics needs from the entire community, including members of Parliament, to assist with the sport’s growth.

O’Neill stated “we need to continue to provide opportunities for all children to participate in Gymnastics and address the issue of over 9.000 children on waitlists.

“We want to ensure every child has the opportunity to participate and develop a lifelong love of physical activity by starting with Gymnastics.”

Gymnast Larrissa Miller echoed these sentiments when discussing her own career which took her to the Olympics in London in 2012 and Rio in 2016 touching on Gymnastics providing significant employment and leadership opportunities for women.

Miller added “I don’t know where I would be without Gymnastics. It has made me a much more confident woman and given me opportunities I’d never dreamed of.”

Image: Dignitaries at the  inaugural function of the Victorian Parliamentary Friends of Gymnastics Group.