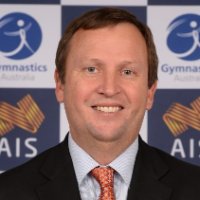 Announcing his resignation after five years at the helm of Gymnastics Australia, Chief Executive Mark Rendell has explained that “it is time for “new eyes and fresh ideas” to lead the sport into the future.

Advising last week that he would be leaving the national organisation, Rendell, who joined Gymnastics Australia in 2012 and also sits on the International Gymnastics Federation (FIG) Executive as the Oceania representative, says he is confident that significant progress over the past five years leaves Gymnastics Australia well placed to move into the next exciting phase of growth and development.

Rendell explained “it has been a privilege to lead a fantastic team of people through such an important period in the organisation’s history, and I’m very proud of what we have been able to accomplish over that time.”

T he past five years has been a strong period for Gymnastics Australia with member numbers having grown by more than 50,000 to nearly 200,000 this year. In addition, coach and judge numbers have doubled to more than 8,000, and Gymnastics Australia, together with the eight State and Territory Associations, are all committed to the new Gymnastics in Australia five-year rolling strategic plan, providing a strong and unified future approach for the sport nation-wide.

The positive restructuring and relocating to Melbourne of the Australian Gymnastics Championships, the establishment of the mass participation National Clubs Carnival and securing the 2017-2020 Artistic Gymnastics World Cup for Australia have all been significant achievements for the sport. These achievements, combined with successful negotiations for the broadcast rights to FIG World Championship events, mean that attendances at events and the public profile of gymnastics in Australia have never been higher.

He adds “the bedding down of the new, five-year Gymnastics in Australia Strategic Plan over the past few months caps off these accomplishments and provides a valuable and exciting framework for our sport at a national level.

“While I’ve enjoyed my time here enormously, I’m fortunate to be able to explore new opportunities outside of Gymnastics. I’m excited about pursuing these opportunities and believe that the timing is right to do that and for Gymnastics Australia to benefit from new eyes and fresh ideas as we look beyond 2020.”

Rendell will officially depart in November and Gymnastics Australia President, Sam McKay, says the Board will begin the search for his replacement immediately, to ensure a smooth transition. McKay concluded “we have a strong and committed team at GA and, with the new strategic plan now well underway, I’m confident the organisation is in good shape to tackle the challenges of the future.

“We sincerely thank Mark for his efforts over the past five years, and wish him well in his future endeavours.”