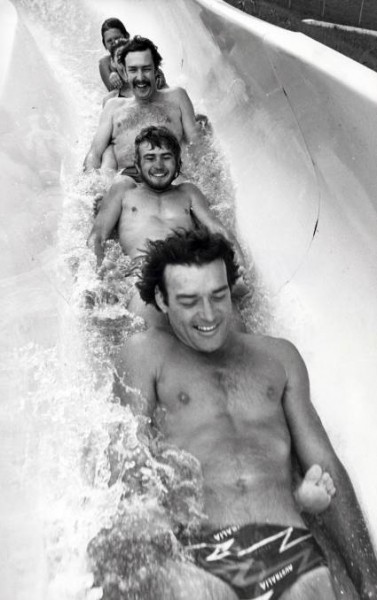 With an $11.6 million expansion underway, Jamberoo Action Park's owners, the Eddy family are looking forward to an era of new management.

The Kangaroo Island development at NSW's largest waterpark and theme park will include Banjo's Billabong, the largest interactive water play area built in Australia, as well as the Funnel Web, the longest and biggest water ride in the world.

Jamberoo Action Park General Manager Dax Eddy explains "our family lives, eats and breathes theme parks and we have searched the planet for the most exciting and innovative water park technology available in the world.

"We have learnt that the addition of new rides and attractions sees increases in visitation between 20% to 40%, providing for a strong and secure trading cycle."

The expansion is another milestone in the 30 year transition of the Jamberoo site from a diary farm to a world-leading waterpark and will coincide with a generational change in the Eddy family's management of the attraction.

In addition to the expansion, a new era of management is underway with the founder of Jamberoo Action Park, Jim Eddy handing over the reins of the business to son, Dax.

Having grown up on the theme park and witnessed its development from dairy farm to leading waterpark, Dax has water rides running through his veins.

He explains, "the future continues to look bright for Jamberoo Action Park. However, we expect that we will have to continue to need to overcome the challenges presented by being a private, family-owned and operated business in an industry which is increasingly monopolised by corporatisation.

"We may be a family-owned, private company but as I take over the helm, I am determined to stay at the head of the theme park pack.

"Jamberoo Action Park has changed a great deal in 30 years. It is not a business where you can easily learn from your rivals as we are quite unique. But we take learnings from overseas and have invested heavily into strategic planning to build what is a state of the art theme park and successful business."

The Eddy family's 'Business of Fun'

1974 The Eddy family first purchased and used the land as a dairy farm. After several years, changes in regulations saw the end of this activity.
1980 The family converted the sloped land into a grass ski park. In the same year Jamberoo Action Park staged the Australian Grass Ski Titles.
1981 Jamberoo Action Park introduced the now famous toboggans as well as speed boats and two water slides. It was this era that cemented Jamberoo Action Park as being the prominent fun park in the Illawarra area.
1986 Jamberoo Action Park developed its first attempt at a Master Plan and included a goal to develop a theme park with a quality family experience, an effective marketing strategy, HR and internal training activity, finance forecasts and a risk matrix on factors such as bad weather and an increase in interest rates.
2000 Jamberoo Action Park developed a five year Master Plan designed to shape the future of the Park with five major attractions, including Outback Bay the largest wave pool in NSW.
2006 The management team visited a number of sites around the world and met with key manufacturers of water slide equipment with the purpose of designing a new Master Plan for the next 10 years.
2007 A 10 year Master Plan was developed to carry the expansion of the Park into the future using the most exciting and innovative technology available in the world.
2012 Following years of development planning and assessment, approval was granted in May to commence construction on stage 1 of the Master Plan, 'Kangaroo Island,' which is set to open in Summer 2012. This will contain the largest Interactive Water Play Area built in Australia as well as the Funnel Web, the longest and biggest water ride in the world.

For more information go to www.jamberoo.net

Image: Jim Eddy (at front) with family members and friends at the opening of Jamberoo's first waterslide in 1981.